Real income of South Korean middle- to working-class urban households fell in the first quarter due to higher inflation, and the trend is likely to continue due to strengthening in prices.

According to data from Statistics Korea on Wednesday, the monthly average nominal income of households based in urban areas gained 6.4 percent on year to 5.7 million won in the first quarter. Real income, which reflects increases in the prices of consumer goods and services, gained only 2.5 percent to 5.4 million won.

The real income of households in the second quintile group fell 1.6 percent on year to 3.11 million won as real earned income fell 2.1 percent. 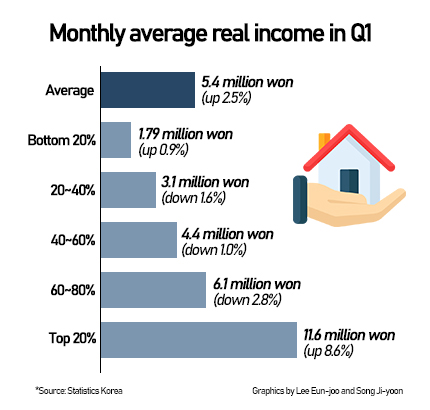 이미지 확대
The real disposable income that excludes essential spending such as on taxes fell across all income brackets – 1.9 percent for those in the second quintile group, 2.4 percent in third, and 3.2 percent in fourth.

While income of the richest and poorest living off social benefit gained, most of the average salary-earning households found income short against higher prices.

Urban families feel the crunch from higher prices than those in rural areas.

Consumer prices rose 6 percent in June against a year ago, the highest since 6.8 percent in the wake of Asian financial crisis in November 1998.