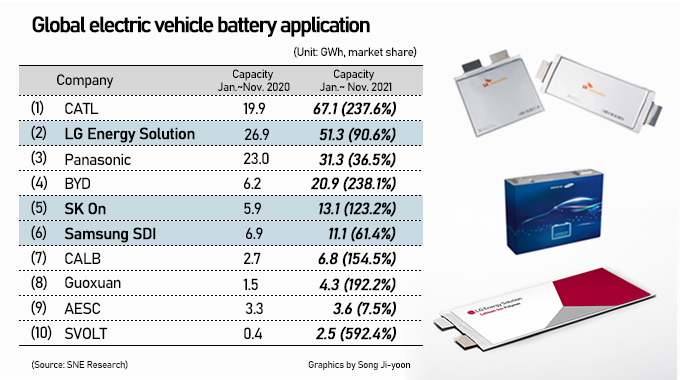 Bellwether LG Energy Solution was behind 51.3 gigawatts per hour (GWh) in powering electric vehicles hitting the roads worldwide in the first 11 months of 2021, up 90.6 percent on year. It nevertheless yielded the No. 1 rank to CATL of China whose market share increased by 10 percent, according to global market tracker SNE Research.

SK On, the latecomer to battery production among Korean majors, raised its share to 5.7 percent to global No. 5 through aggressive expansion. Samsung SDI contributed to 4.8 percent to come at despite a gain of more than 60 percent.

Their combined share amounted to 32.7% as of November, although losing 5 percentage point from a year-earlier period amid ascension of Chinese brands.

According SNE Research, the total battery energy in electric cars (pure electric cars, plug-in hybrid cars, and hybrid cars) sold in January to November of 2021 increased to 231.2 GWh, more than doubling from a year ago period.

Most Chinese battery companies such as BYD, CALB, and Guoxuan have increased their market share due to the growth of the Chinese market. Panasonic and other Japanese companies performed below the average.