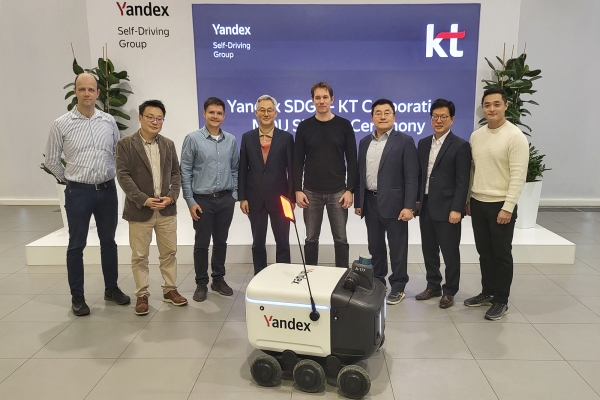 KT announced on Tuesday that it has agreed with Yandex Self-Driving Group (Yandex SDG) to launch autonomous delivery robots in Korea by the end of this year. Under agreement, Yandex will provide its delivery robot dubbed “Rover” while KT backs the wireless networking and GPS service to ensure Rover’s adjustment to local roads.

Yandex is the largest technology firm in Russia, operating the country’s biggest internet search engine and various internet-related products and services. Its self-driving robot Rover has been in service in some regions of Russia since the end of 2020 and started delivering goods in Ann Arbor, Michigan in the United States and Tel Aviv in Israel last year. It established a self-driving joint venture with Uber.

Yandex hopes its partnership with KT can tap Korea’s last-mile market. The global last-mile market is expected to grow to 100 trillion won ($83 billion) in 2030, seven times bigger than now.

Delivery robots are also expected to help save costs by replacing human labor for the last mile. According to Samsung Securities, the last mile accounts for 53 percent of the whole cost of all delivery stages.

Robotic delivery in Korea is still restrained by various regulations.

Under current domestic laws, autonomous robots are classified as motor vehicles and prohibited from driving on sidewalks or crosswalks. Photos, taken while driving, may violate the Personal Information Protection Act.

Baedal Minjok, the largest food delivery app in Korea, and local delivery robot developers have tapped the market, but their services have been restricted to apartment and building complexes.

Industry observers have been warning the domestic market once it is ready for opening could be dominated by foreign players with earlier road experiences.

By Na Hyun-joon and Jenny Lee