Stock and corporate performance moves in opposite directions for Korean Inc. 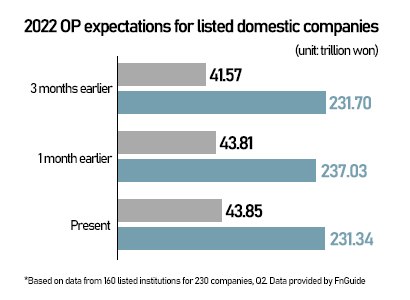 이미지 확대
Stock and corporate performance of the Korean Inc. are going in opposite directions as the Korean capital market continues to be rattled by foreign flight amid faster rises in the U.S. rates.

According to FnGuide on Tuesday, the annual operating profit estimates based on data from at least three securities firms of 230 companies listed on the Kospi and the Kosdaq would amount to 237.35 trillion won ($183.1 billion) as of Monday, upgraded 2.4 percent from three months ago and rising slightly from 237.372 trillion won a month ago.

Operating profit estimates for the second quarter also remains high. The combined estimate came to 43.852 trillion won, which would be up 5.5 percent from three months ago and revised up from 44.7 billion won estimate a month ago.

The country’s main Kospi index plummeted 12.65 percent in the second quarter and the Kosdaq 17.25 percent.

Bellwether stock Samsung Electronics plunged 15.94 percent in the second quarter alone even as its operating profit estimate had been adjusted upwards by 12.9 percent in three months.

Considering that stocks move before profit estimates are revised, the earnings outlook for Korean companies could be downgraded once the second-quarter earnings season begins, warned market analysts. This could trigger another round of massive selloffs in local stocks.

According to Leading Investment & Securities, in the past 12 years, the discrepancy between earnings expectations and stock prices occurred twice, once in 2012 and then in 2018 when estimates were revised downwards after earnings reports were released.

By Kang Min-woo and Susan Lee