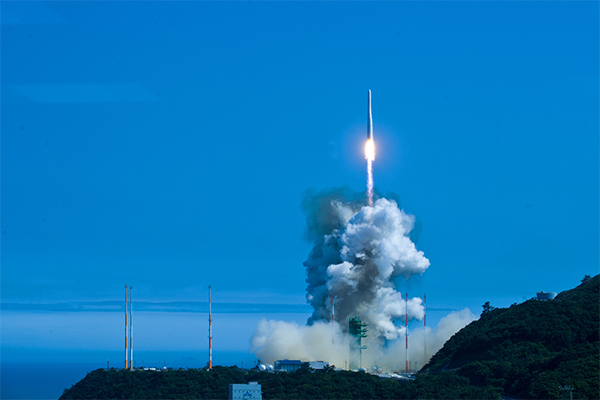 [Photo provided by The Ministry of Science and ICT]

South Korea’s space project has gotten confidence traction from the momentum of putting a real satellite into orbit through independent technology from launch to exploration.

On Tuesday, the Ministry of Science and ICT and Korea Aerospace Research Institute (KARI) successfully launched 2oo-ton Nuri, also known as Korea Space Launch Vehicle-II (KSLV-II), from the launch pad at the Naro Space Center in Goheung, South Jeolla at 4 p.m. It was the second attempt to lift off its own rocket into space after a first last October. The launch was originally planned to take place last week but was delayed due to strong wind and later technical glitch.

Nuri – carrying a performance-verification satellite and four cube satellites and a dummy payload – reached target orbit of 700 kilometers above the Earth. All three stages of the rocket engine separated as planned after liftoff.

Korea plans to proceed with the third launch of Nuri next year. The government will spend 687.3 billion won ($532.3 million) in a project to advance its own space launch vehicle to nurture space industry ecosystem and enhance vehicle reliability by 2027.

The third flight model (FM3) of Nuri rocket that will be launched next year is already in the process of assembly by stage. The third Nuri rocket and those onwards will load an actual satellite instead of a performance verification satellite.

The previously developed 100 kilogram small satellite 1 had been launched on Falcon 9, a reusable rocket of U.S. Space X in the end of 2018.

The fourth Nuri rocket that is to be launched in 2024 will carry a 500 kilogram next-generation mid-size satellite No. 3 and an extra small satellite No. 1 weighing less than 50 kilograms. The Korean government plans to develop 100 mini satellites by 2031 for space environment observation and sixth generation telecommunications establishment.

Nuri that is capable of carrying 1.5 tons of satellites into low Earth orbit will also be used to provide satellite launch services to other countries.

Nuri will end its test with launch of a sixth vehicle and will be employed for development of other small and large launch vehicles. The 75-ton liquid engine from Nuri rocket development will also be used to improve performance and develop big and small launch vehicles through clustering that puts together many engines.

The first target will be launching a lunar landing module in 2031.

By Lee Sae-bom and Lee Eun-joo