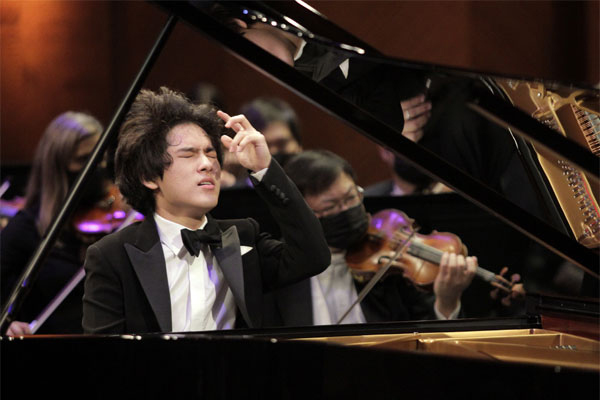 South Korean 18-year-old pianist Lim Yunchan has been crowned the winner of the 2022 Van Cliburn International Piano Competition, becoming the youngest-ever gold medalist in the 60-year-old piano competition and receiving a standing ovation for his performance of Rachmaninov Piano Concerto No. 3.

“I did not expect to win (the gold medal) at all, and I still can’t believe that I have been awarded with such a prestigious award,” said Lim in a phone call with Maeil Business Newspaper after the awards ceremony. “I feel the weight (of receiving this award) and I will strive to live up to the honor.”

Lim’s award includes a cash gift of $100,000 and three years of concert tours and career management by the organization. He is also the second South Korean in a row to win the top prize at the competition after Sunwoo Yek-won in 2017.

Lim has won the Beverley Taylor Smith Award for Best Performance of a New Work and the Carla and Kelly Thompson Audience Award, which is awarded based on votes from 30,000 classical fans around the world.

His performance of Rachmaninov’s Piano Concerto No. 3 in D Minor, op. 30 in the final round brought conductor Marin Alsop, who is also the chair, to tears and the audience to their feet. He also played Beethoven’s Piano Concerto No. 3 in C Minor, op. 37 during the final round. His win was somewhat expected after he showed off his dazzling piano technique during his performance of Liszt’s complete 12 Transcendental Etudes in the semifinal round.

Lim started playing the piano when he was seven years old and currently studies at the Korea National University of Arts in Seoul under Professor Sohn Min-soo. He has never studied abroad. He earned his first international fame after winning the second prize and the Chopin Special Award at the Cleveland International Piano Competition for Young Artists in 2018. He became the youngest pianist to win Korea`s Isang Yun International Competition in 2019.

The Cliburn is known as one of the most prestigious but grueling classic music contests in the world, consisting of recital programs, new work performance, chamber music, and two concertos for each competitor. This year there were 30 competitors selected for the preliminary round out of a total of 388 submissions.

The second prize went to the oldest of the competitors, 31-year-old Anna Geniushene of Russia, and the third prize to 28-year-old Dmytro Choni of Ukraine.