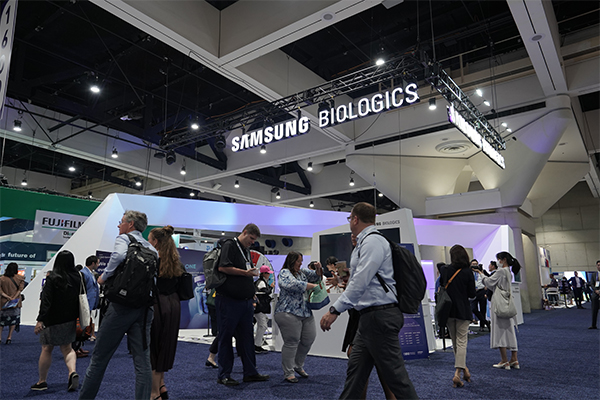 Korea ranked second behind the host country, the United States, in the number of exhibitors enrolled with 225 in the five-day event where a total of 1,140 booths were booked out. Some 3,200 visitors from 65 countries crowded over Korean booths to explore the latest innovations and technologies displayed in the partnering convention held in person for the first time in three years since the coronavirus pandemic broke out.

Korean healthcare companies were active in promoting their pipelines in hopes to discuss licensing deals and research collaborations. Key names include Samsung Biologics, Celltrion, CHA Biotech’s USA subsidiary Matica Biotechnology, and SK pharmteco’s CDMO subsidiary Yposkesi. Lotte Biologics, the youngest brand in the sector, made a debut with a small display booth on the floor.

Samsung Biologics adjacent to Novartis was the busiest booth at the show on the first day with eye-catching banners and exhibition space that outsized the one of European big pharma Boehringer Ingelheim. The Korean CDMO giant which has participated in the conference since 2011 has been in the path of expansion based on its manufacturing capacity recognized through numerous contracts with global players.

Celltrion, which has maintained its presence in the event since 2010, launched its own promotional campaign to create opportunities for partnerships. Matica Biotechnology is preparing to talk one on one with more than 50 existing and prospective customers.

Some Korean pharma giants such as Yuhan and Hanmi are leveraging the event without a booth. An official from JW Pharma’s business development team said the company has pre-arranged meetings with about 20 companies, including big pharmas, to discuss potential deals over its investigational gout and cancer drugs.