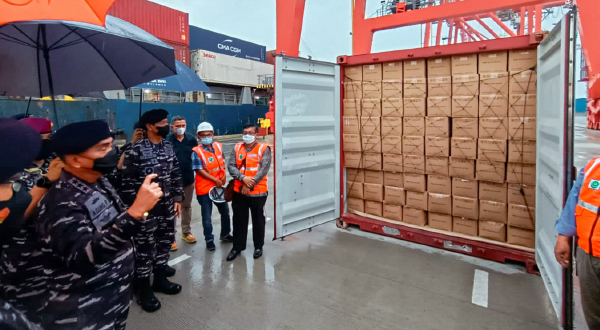 The Indonesian Navy Fleet Commander Vice Adm. Agung Prasetiawan (left) inspects a container filled with cooking oil at the port of Belawan in Medan, North Sumatra, which was planned to be shipped to Malaysia, on May 6, 2022. (Agence France-Press/Jakfar)

The Industry Ministry has announced it would scrap the subsidy for bulk cooking oil, effective from Tuesday, leaving many producers unable to file a subsidy claim for selling the staple food below market prices. Introduced in January, the subsidy scheme compensated producers for selling cooking oil at Rp 14,000 (96 US cents) per liter at a time when market prices were at Rp 20,000 per liter due to high global crude palm oil (CPO) prices. The difference was covered using funds from the Palm Oil Support Fund Agency (BPDPKS).

Putu said the Trade Ministry would compensate producers by offering to convert the payable subsidies into cooking oil export quotas.

As of Monday, 35 out of 61 companies were willing to take the offer, Putu said, adding that the ministry was expecting the rest to respond soon. Of the 61 companies, only five of them have made a claim and received the payable subsidy as of Monday, ministry data show. Putu said the other companies failed to submit the necessary documents.

Through the MGCR program, the government expects to increase domestic bulk cooking oil supplies up to 12,000 tons a day, from 9,000 tons previously, Putu said. The numbers were calculated based on Statistics Indonesia (BPS) and Trade Ministry data. Ahead of the new policy, the average price of bulk cooking oil has remained at Rp 16,620 per kilogram, far above the Rp 15,500 per kg ceiling price, according to Trade Ministry data. Putu said that despite the gap, the ministry was confident that prices would soon hit the price target as the government had secured more than 442,672 tons of bulk cooking oil from March up to Monday.