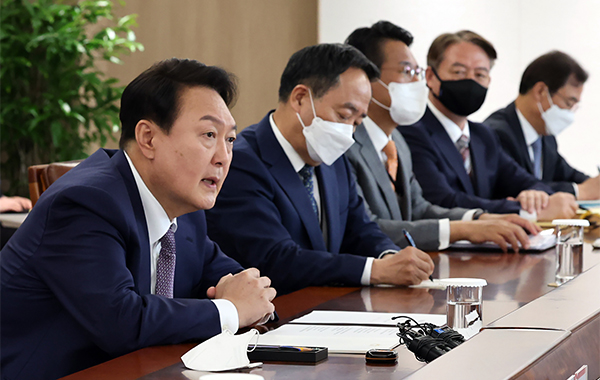 South Korea’s President Yoon Suk-yeol raised alert against stagflation risk Wednesday as he convened his first secretariat meeting, while the Ministry of Economy and Finance immediately formed a task force to address to strong inflation and weakening of the Korean won.

“The economy is very difficult. Prices are the biggest problem. Hardship won’t pause because the government is in transition,” Yoon said in his first state-affairs meeting upon inauguration on Tuesday.

“The factors behind rising prices and measures to contain them must be studied persistently. Since energy prices have all risen, the danger of stagflation has lit up red light in industrial competitiveness,” he said.

Deputy Prime Minister and Minister of Economy and Finance Choo Kyung-ho who is acting as head of the cabinet due to delayed confirmation of the prime minister on his first day in office on Tuesday went straight to urgent issues related to inflation and supplementary budget plan.

He placed the first vice minister in charge of an emergency taskforce team to promptly respond to dangers in the economy.

Korean benchmark stock indices and won have hit annual lows, with the U.S. dollar nearing 1,300 won for the first time in 13 years.

Stagflation warnings have come off as the monthly inflation rate neared 5 percent, while the gross domestic product growth slowed to under 1 percent in the first quarter.