Sanguine outlook for Hyundai, Kia sales on track despite setback in China, Russia

Despite setback in sales of China and Russia, Hyundai Motor Co. and Kia Corp. will likely keep up robust earnings streak in the second quarter on eased chip crisis and popularity of green fleet in western markets.

Kia during the conference call after releasing its first-quarter statement said chip situation started showing signs of improvement in mid-April, projecting supplies of car controller chips would be normalized in May and powertrain controller chips in the second half.

Hyundai Motor also had been sanguine about normalization of automotive chips within the year.

“At current rate, Kia’s monthly output will recover to the level of 270,000 units by the third quarter,” said Kim Gwi-yeon, an analyst at Daishin Securities.

Once finished car production gets back to normal, automobile sales can surge, given the delayed orders. The automotive industry estimates currently there are 15 million units of potential demand across the globe. Considering Hyundai Motor and Kia’s market share of 8 percent last year, they have potential demand for 1.2 million units.

Hyundai and Kia’s auto sales are estimated to rebound from May. Their combined sales in the United States fell 16.7 percent on year to 125,770 units last month, but the utilization rate in Korea and the U.S. went up in March. 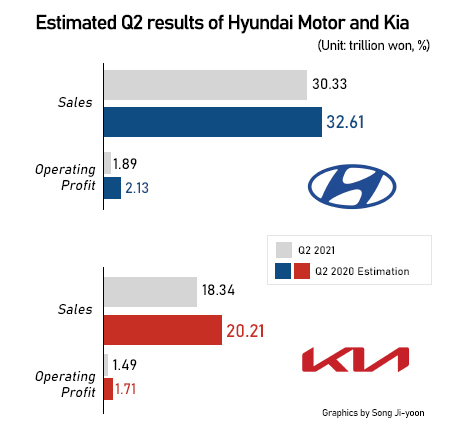 The average sales incentive offered on Kia vehicles in the U.S. was lowered by 53 percent on year in the first quarter, pushing up the carmakers ASP by 12 percent to 29 million won ($23,014). Kia’s annual ASP for this year is expected to increase by more than 9 percent from the previous year.

By Kim Je-gwan and Lee Ha-yeon