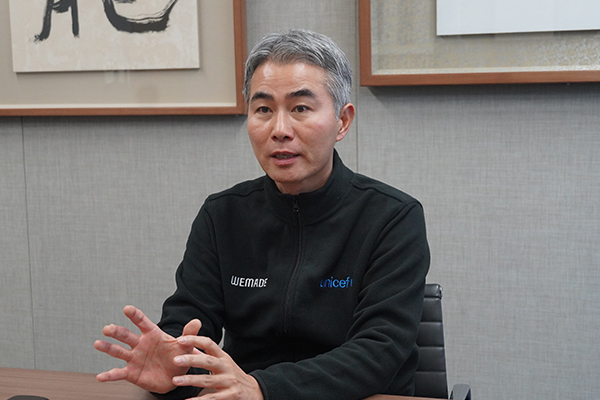 Shares of Wemade Co. bounced back on Wednesday from a nearly 9 percent loss in the previous session after the company refuted a local media report that the Korean video game developer took profit from the unexpected massive selloffs of its cryptocurrency Wemix.

The cryptocurrency’s value surged thanks to the popularity of its new game Mir 4, hitting nearly 30,000 won ($25) per coin in November last year, up by almost 30 times from September. But on Wednesday, the asset traded at 9,355 won on Bithumb, down by two thirds from its peak over the past two months and the company’s massive coin sale was widely suspected of having caused the decline.

Wemade chief executive Chang Hyun-gook admitted the coin sale, which was not disclosed in a timely manner, but he told Maeil Business Newspaper that the proceeds will be used to support its aggressive expansion plan to create its own ‘play to earn (P2E)’ ecosystem, which will eventually raise the value of both the company and the cryptocurrency. He emphasized that not a single Wemix coin has been distributed to Wemade members.

Wemade has issued a total of 1 billion Wemix coins. Of these, 83 percent is owned by the company’s Singapore-based affiliate Wemade Tree. About 120 million are in circulation in the market.

The Wemix sale was not an abrupt decision but a planned one to secure funds to create a new market and business model, and the company is currently pursuing a large-scale M&A deal with a global game company with the funds, said Chang, adding that that Wemade will make the disclosure of cryptocurrency sales mandatory to ensure transparency in the future to prevent any misunderstanding.

In response to the criticism that the company’s massive selloffs of Wemix contributed to its price drop, Chang refuted it, saying that the sale was made several times to minimize any market impact before the cryptocurrency price started to decline.

Market watchers believe Wemade’s Wemix sale was concentrated at the end of last year, when the company announced its acquisition of popular ‘Anipang’ game developer SundayToz. But Chang said the company already secured the funds to acquire SundayToz prior to the transaction.