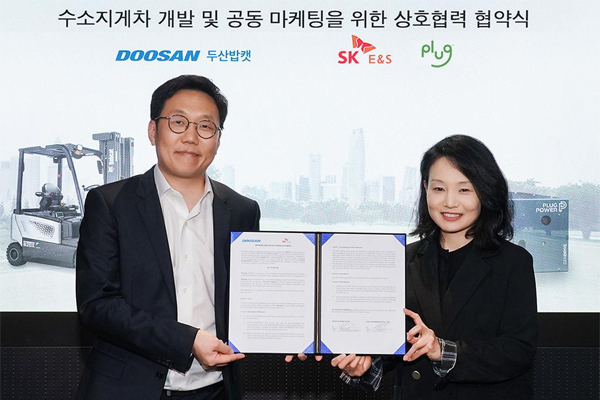 Doosan Bobcat announced on Tuesday that it signed a memorandum of understanding (MOU) with the joint venture between SK E&S and U.S. Plug Power to collaborate in developing hydrogen forklifts.

Under the MOU, Doosan Bobcat will oversee the development of hydrogen forklifts. The SK E&S-U.S. Plug Power joint venture will be responsible for developing and supplying fuel cells for hydrogen forklifts and installing hydrogen charging stations.

The SK E&S-U.S. Plug Power joint venture was established in October last year to build a base for mass production of hydrogen fuel cell and water electrolysis equipment in South Korea.

Electrification of commercial vehicles such as heavy-duty trucks has been notoriously difficult because of range issues from limited battery capacity. However, with light and dense hydrogen fuel cells, forklifts will be able to charge within three minutes and large trucks in 15 minutes.

The weight of batteries will also be reduced, enabling long-haul and heavy-duty transportation.

Hydrogen forklifts are already in use in the United States, with more than 52,000 units deployed by 165 large businesses, including Amazon, Walmart, and Home Depot. Logistics centers in Japan and Germany are also planning to deploy hydrogen forklifts.

Doosan Bobcat currently sells one-ton electric excavators in North America and Europe and it plans to release three-ton excavators later this year. The company unveiled its all-electric Bobcat T7X compact track loader in January this year that fully eliminated all hydraulics and components.