“Employment recovered in 2021 thanks to the base effect, remote working and learning, digitalization, industrial restructuring, and strong exports of 2020,” said Kong Mi-sook, a senior Statistics Korea official.

The annual addition was largest since 2014 when the country added 598,000 jobs. But the rise also goes against low base effect as payroll fell by the largest of 218,000 in 2000 since the financial crisis in 1998 due to pandemic outbreak.

For December, the employed increased by 773,000, the largest monthly addition since February 2014.

The number of people that were employed at the accommodation sector increased by 66,000 in December. The number of self-employed workers with paid hires rose by 53,000, making the first gain in more than three years.

Still, for the full year, the accommodation and restaurant sectors areas stayed hammered by Covid-19, losing 47,000.

The number of wholesale and retail workers fell by 150,000 for full year. The arts and sports and other leisure-related service sectors and the association, group-led business, repair, and other personal service sector also fell by 29,000 and 55,000, respectively. 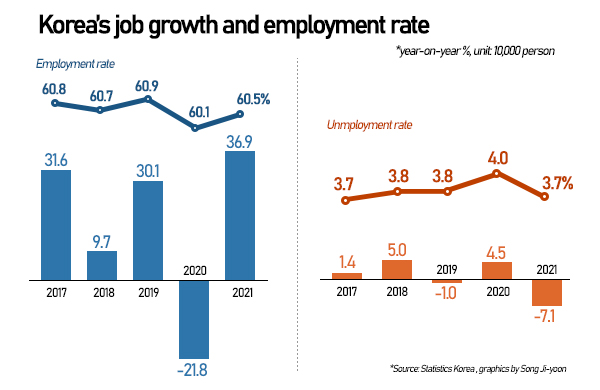 이미지 확대
The employment rate for those aged 15 years and older rose 0.4 percentage points to 60.5% compared to the previous year.

The unemployed count slimmed by 71,000 to 1.04 million last year, bringing down the unemployment rate 0.3 percentage point from a year earlier to 3.7 percent.

The economically inactive population – those who are neither working nor actively seeking jobs - decreased by 3,000 to 16.77 million from a year earlier.