LG Chem on Tuesday held a groundbreaking event on Tuesday for the factory capable of producing 60,000 tons of cathode materials per year, which can be used in batteries to power about 500,000 units of all-electric performance vehicles. It expects to invest 475.4 billion won via its subsidiary LG BCM through September 2024 to build the factory in Gumi, North Gyeongsang Province with an aim to complete the construction by 2025.

Cathode material, a core material in rechargeable battery, takes up nearly 40 percent of production costs for a lithium-ion battery. LG Chem plans to supply nickel-cobalt-manganese-aluminum (NCMA) cathode materials from the new factory that is expected to enhance battery stability and output at lower costs.

With the new facility, LG Chem’s cathode materials production capacity at home will more than double from now. The company currently churns out a total of 40,000 tons per year from its Cheongju and Iksan plants in Korea and another 40,000 tons from the Wuxi plant in China. For the new Gumi plant, China’s No. 1 cobalt supplier Zhejiang Huayou Cobalt Co. will continue to supply raw materials as part of cooperation to counter any abrupt future price hike and supply shortage. 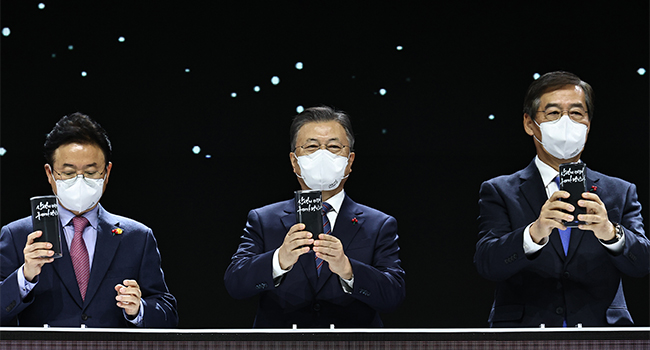 “LG Chem will use the best-in-class technologies and facilities for the Gumi plant to make it the world’s No. 1 factory for meeting the fast-growing demand for EV battery materials,” said Shin.

President Moon also celebrated the groundbreaking, saying the new factory will give an opportunity for the Gumi industrial complex and the domestic battery industry to make a leap forward.

“The North Gyeongsang Province will become a battery hub, and Korea will be able to lead the global battery supply chain,” Moon added.

With the new factory, about 8,200 new jobs will likely be created in Gumi, according to the Ministry of Trade, Industry and Energy.