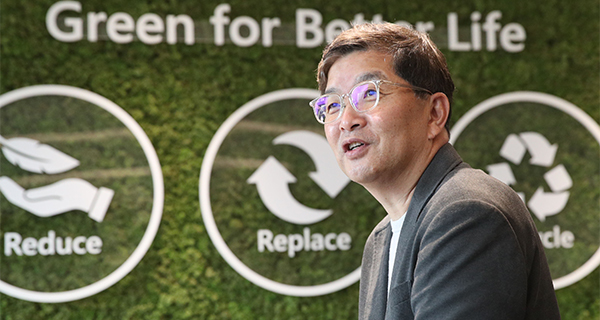 SK geo centric last year declared transfer into a green company with focus on three chemical recycling technologies such as pyrolysis, depolymerization and ultra-pure recycling. It has gained an upper hand in the eco-friendly business by winning an exclusive right to join the PET recycling business of Loop Industries in Asia. In addition, SK geo centric has recently participated in PureCycle Technologies` private placement as a strategic partner, accelerating the PP recycling business in Korea as well as discussing to expand a path to China and the Southeast Asian region.

Na sees China as the first market for its overseas forays as producers take the responsibility of waste collection in the country.

“The company has already been in talks with local entities with an aim to forge a partnership with China’s leading plastic product makers for the project,” he added.

Vietnam crowded with clothes factories is another appealing market as waste-dyes and textiles can be transformed into useful products with values, according to Na. As part of the broader global plan, SK geo centric will build a waste-plastic recycling cluster first in Ulsan, South Gyeongsang Province by investing a total of 1 trillion won ($811 million) and mustering chemical recycling technologies of Loop Industries and PureCycle Technologies. The factory will be able to incorporate all three chemical recycling technologies such as pyrolysis, depolymerization and ultra-pure recycling and serve as the gateway to the global market, the company said.

It will set up a joint venture with PureCycle by the second to third quarter, and discussion with Loop Industries for a JV is underway.

For pyrolysis oil, SK geo centric is reviewing to buy the technology for its Ulsan factory operation. It is planning to supply its pyrolysis oil produced from the cluster to SK Innovation’s refinery in Ulsan. Construction is scheduled to start in early 2023 for completion in 2025. Once it becomes operational, the cluster will be able to recycle 200,000 tons of waste-plastics per year and reduce 500,000 tons of carbon emissions a year from 2025.