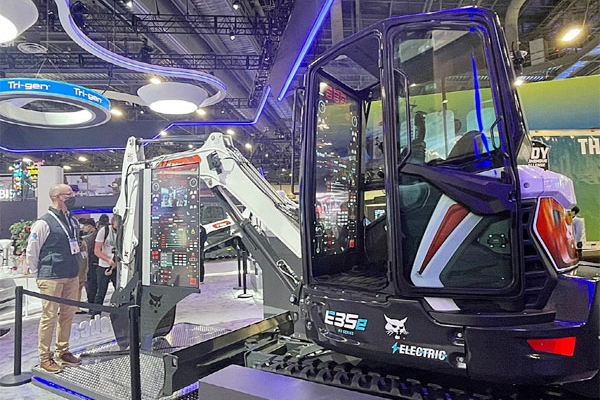 At the Consumer Electronics Show (CES) 2022, held in Las Vegas, Doosan Bobcat showcased the prototype of its electric compact excavator, E35e. The concept model of the compact excavator is applied with LG Display`s new transparent organic light emitting diode (OLED) on its windshield that serves as a control panel supported by AR technology.

The operator of the E35e can check the location and conditions of a construction site through the AR-backed transparent touch screen on the windshield, allowing the operator to control various functions remotely in real time through the touch screen. This technology also enables the operator to even control other excavators from a distance in real time. Work safety is also enhanced thanks to this large, flat panel on the windshield without physical controlling buttons and other components that obstruct the operator’s view in the conventional models.

If Doosan Bobcat decides to mass produce the E35e, it is expected to work with LG Display that is the world’s only supplier of transparent OLEDs.

Demand for transparent OLEDs has been on the steady rise. They are already being used in places such as shopping malls, museums, and subways.