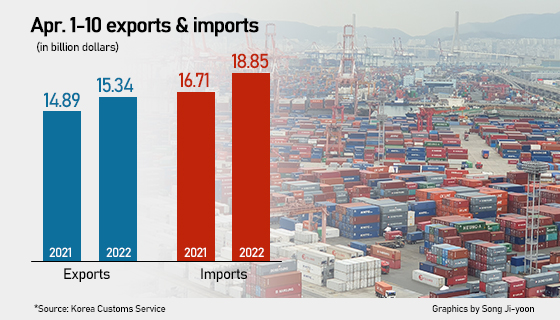 이미지 확대
South Korean exports have sharply lost steam, while imports maintained expansion in double digits due to spike in fuel cost, resulting in a trade deficit of more than $3 billion in the first 10 days of April.

According to data released by the Korea Customs Service on Monday, the country’s exports totaled $15.34 billion in the first 10 days of April, up 3 percent from a year-ago period. Daily exports averaged at $2.17 billion, gaining 17.7 percent from a year earlier, based on seven working days, a day shorter than a year ago.

Until March, exports kept winning streak against a year-ago period in double digits –15.5 percent in January, 20.6 percent in February, and 18.2 percent in March.

Imports in the first 10 days of April soared 12.8 percent on year to $18.85 billion, delivering a trade deficit of $3.52 billion, as the result of strong fuel cost.

Russia last year banned exports of 219 items to prevent supply shortages and price hike in the country, but energy-related products Korea depends on imports from Russia were not included in the list.