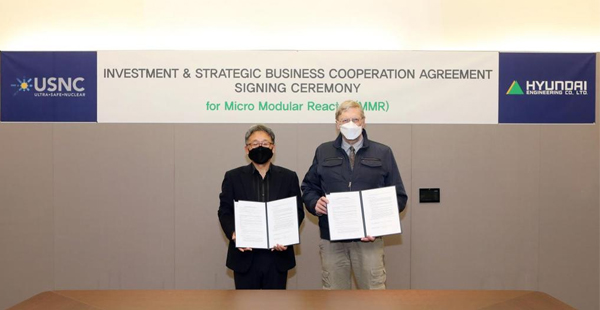 The partnership includes the Korean engineer’s global exclusive rights to the engineering, procurement and construction (EPC) for micro modular nuclear reactor (MMR) projects of the rising U.S. developer of the next-generation nuclear energy.

Micro nuclear reactors are gaining spotlight in the U.S. and Europe for their superior economic efficiency and safety compared to conventional reactors. Studies of various types of MMR are underway in many countries as a game changer for carbon neutrality.

Hyundai Engineering and USNC started collaboration for technology development of a high temperature gas-cooled reactor in March 2012. In cooperation with Korea Atomic Energy Research Institute (KAERI), they have been conducting conceptual and basic designs of the reactor.

In February 2019, they won the licensing approval from Canada’s nuclear authorities. They aim to start construction of an MMR demonstration plant at the Chalk River Nuclear Laboratory site in the northeast of Toronto, eastern Canada, this year, with commercial operation set to begin in 2025.

The MMR energy system for Chalk River being promoted by Hyundai Engineering, USNC and KAERI, is receiving great attention in the global nuclear power plant market as it is the most advanced in commercialization among 4th-generation reactors.

Hyundai Engineering is responsible for EPC for the project, and USNC for nuclear fuel supply, reactor design, and manufacturing and supply, and KAERI for nuclear fuel layout design and safety analysis.

The 4th-generation MMR developed by USNC is considered safer and cleaner and more cost-effective, with patented technology for micro-encapsulated ceramic triple-coated nuclear fuel applied to the reactor design to eliminate the possibility of radioactive material leakage even at 1,800 degrees Celsius. Even in a serious accident case like the Fukushima nuclear power plant accident, the melting of nuclear fuel in the reactor is fundamentally excluded.

By Seo Chan-dong and Minu Kim