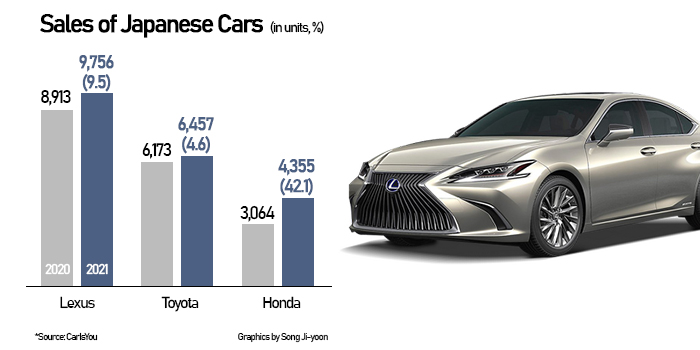 이미지 확대
Sales of Japanese cars in South Korea rose 13.4 percent on year last year, suggesting easing in the boycott against Made-in-Japan after Tokyo’s export curb on IT components amid conflict over wartime labor compensation issue.

Other Toyota cars sold 6,457 units, a 4.6-percent increase on year. Toyota launched the hybrid models of the Camry and Sienna mini van in May last year, which was met well amid recreational demand in Korea. Honda sales also surged by 42.1 percent during the same period following the launch of its hybrid versions of the Accord and CR-V in Korea in January last year.

Growing interest in eco-friendly cars has also driven the recovery in Japanese car sales as Japanese automakers such as Toyota pioneered the hybrid car market. Japanese cars are expected to launch new models this year. Lexus will launch its first electric vehicle, the UX300e, and the new NX Plug-in Hybrid model in the first half of this year.

Faster delivery by Japanese cars amid shipping delays also helped their sales. Carmakers worldwide, including Hyundai Motors and Kia Motors, have suffered from a shortage of automotive semiconductors amid the pandemic, taking car delivery up to a year or longer. However, Japanese carmakers are relatively less impacted due to their inventories.

By Lee Sae-ha and Jenny Lee