Xsamsung held its first official network event at the Caesars Hotel in Las Vegas on Jan. 7 (local time), where it signed a memorandum of understanding (MOU) with Maeil Business Newspaper at the MK CES Forum 2022 to work together to create an ecosystem for startup innovation.

Xsamsung is a networking community organized by employee offspring of Samsung family after benchmarking Xoogler, the network organization formed by former Google employees that have evolved to startup founders, executives from renowned tech and Wall Street companies and venture capitalists in Silicon Valley and New York. Xsamsung has 700 active members from the startup industry, Big Tech and Wall Street banks.

"Ex-employees of Samsung are familiar with working for a common goal and achieving it,” said Xsamsung Governing Body Chair Lee Mingu, also a managing partner at Cleveland Avenue. “We are ambitious to make a positive impact on the world and grow together." 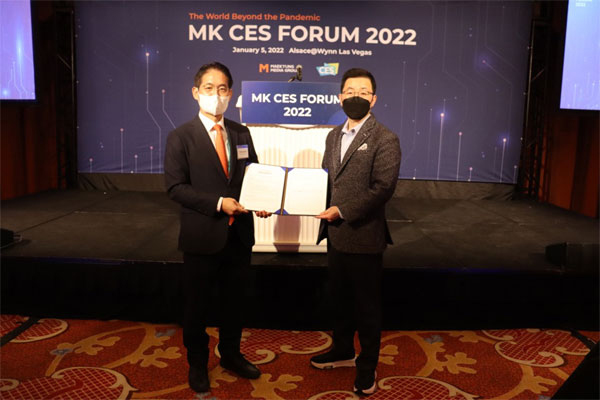 Xsamsung Governing Body Chair Lee Mingu and Kim Dae-young, vice chief of Maeil Business Newspaper, are signing a memorandum of understanding for collaboration to build an ecosystem for innovation. [Photo by Lee Sang-duk]

Xsamsung is joined by former Samsung members who are now entrepreneurs for Unicorn (enterprise value of more than $1 billion) startup entrepreneurs and management-level figures at Amazon, Metaplatform, Spotify, and Goldman Sachs. They are active in New York, Silicon Valley, Chicago, Korea, the United Kingdom, Singapore, Mexico, and the Netherlands.

Xsamsung aims to create a startup ecosystem in which ‘Samsung DNA’ is melted beyond simple networking.

X-Samsung has actively cooperated with Xoogler since its launch. It has formed an operating team of 100 members for efficient management. It also has edtech, healthcare, fintech, and robot science subcommittees.

In Silicon Valley, successful entrepreneurs are active in creating new startups and engaging in venture investment. The early founders of Facebook, together with Mark Zuckerberg, invested in social media services and funded each other’s firms at the initial stages. PayPal founding members – Steve Chen, Elon Musk, and Reed Hoffman – sold the company to eBay and started new startups – YouTube, Tesla, and LinkedIn, respectively, – with the funds secured from the PayPal selloff. They are called the PayPal Empire.

Samsung is called the `Venture Academy` in Korea as it has produced a large number of leaders in South Korea’s IT industry. According to the CEO score survey, among the 123 founders of 115 domestic Unicorn companies (including preliminary Unicorns), 13 are from Samsung, accounting for 18.6 percent of the total.

By Lee Sang-duk and Jenny Lee