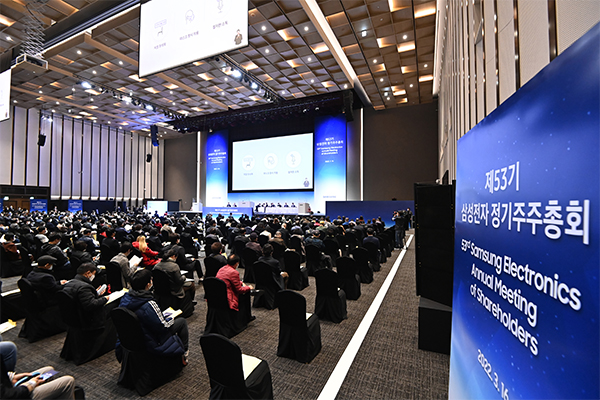 “The company will discover new growth momentum through new businesses such as metaverse and robots,” Han Jong-hee, Samsung Electronics vice chairman and chief executive officer, said at the annual shareholders meeting on Wednesday.

The South Korean tech giant is rushing to foster the growth of its robotics business. It has run a team dedicated to the development of robot technologies for years. In August last year, it revealed a bold investment plan to inject 240 trillion won ($196 billion) into future technology areas, including robots and artificial intelligence, over three years.

It already has introduced a wide range of its robotics inventions since showcasing its first robot – Samsung Bot Care for providing personalized elder care – in 2019. In the following year, it introduced Ballie, a small ball-shaped home robot for helping with household chores. At CES consumer electronics tradeshow last year, it showed off wearable robot GEMS for physically supporting users who have trouble walking, running or standing up.

Industry watchers anticipate commercial production of GEMS to begin around April this year.

Samsung’s aggressive move in growing robotics business comes as demand for robots in daily life grows rapidly. According to market researcher Mordor Intelligence, the global robotics market is forecast to expand from $27.73 billion in 2020 to $74.1 billion by 2026.

Along with robotics, Han presented metaverse as another core area to drive the company’s future growth.

The company reportedly is in preparation to introduce metaverse-related augmented reality devices with technology it has developed together with DigiLens, a U.S-based company specializing in augmented and extended reality.

It launched a virtual replica of Samsung 837X, its flagship location in New York, in Decentraland, an Ethereum-based metaverse, at the CES 2022 in January this year.