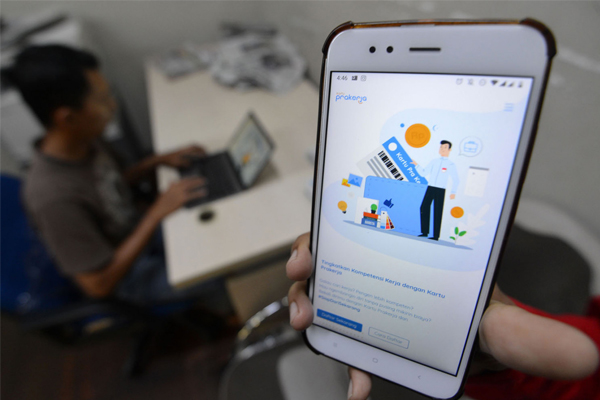 A citizen looks up information of the Kartu Prakerja reskilling program in Jakarta on April 20, 2020. (Antara/Aditya Pradana Putra)

Jaya Latchmi Mutusammy had worked several years in customer service and finance in Singapore, when caring for her ailing parents and demand for healthcare workers during the coronavirus pandemic led her to change track, with help from the government. Mutusammy, 47, is among tens of thousands who have tapped the city-state`s SkillsFuture Singapore program, an education and training initiative for adults that has been rejigged to prepare workers for the pandemic environment. "With my mom and dad in and out of hospital, I saw how critical healthcare professionals were, and did a certificate course in healthcare support through SkillsFuture and got a job as a clinical assistant," Mutusammy said.

"Then the pandemic hit, and healthcare workers became even more key. So I did another course in phlebotomy, as I saw drawing blood was a much-needed skill, and I didn`t want to be left behind," she told the Thomson Reuters Foundation. The coronavirus pandemic upended jobs globally, with unemployment worldwide forecast to be 207 million in 2022 - compared to 186 million in 2019 before the coronavirus hit, according to the International Labor Organization (ILO). About half of all workers will need reskilling in the next five years, the World Economic Forum (WEF) said in a 2020 report, and governments and corporations are crucial in ensuring low-wage workers are not forgotten. In Asia, countries including India, Singapore and Malaysia set up skilling programs and offered tax incentives and cash subsidies to boost learning in sectors such as information technology, healthcare and the so-called green economy.

Technology firms including Microsoft, Google, Amazon and IBM also launched global initiatives to train workers for tech jobs. But while there was a sharp rise in people seeking online learning, particularly digital skills, during the pandemic, there is a risk of widening inequality as large sections of the population remain unable to access them, WEF noted. "If governments and corporations do not focus on skilling the workforce and making them employable, it will lead to an unprecedented increase in social and economic inequality," said Rituparna Chakraborty at TeamLease, a staffing firm in India.

Priority pillars The coronavirus pandemic and the lockdowns to control its spread affected a wide range of industries, from aviation to tourism and hospitality to retail, with millions of workers furloughed or laid off worldwide. Many of these jobs are not coming back, as firms have deployed automation and artificial intelligence (AI) in warehouses, grocery stores, call centers, and manufacturing plants to reduce congestion and meet stricter health rules. By 2025, some 85 million jobs may be displaced by a shift to machines, while 97 million new roles related to machines and algorithms may emerge, WEF noted. Malaysia last year launched its digital economy blueprint, and allocated 1 billion ringgit (US$240,000) in its budget this year for upskilling and reskilling programs, while a skills pledge in New Zealand requires companies to double their on-the-job training and reskilling by 2025. Singapore`s SkillsFuture uses big data and machine learning to monitor trends in global, regional and local jobs and skills to help workers "stay relevant and employable" with training, career coaching, webinars and subsidies for course fees. About 540,000 Singaporeans participated in SkillsFuture initiatives in 2020, compared to 500,000 the previous year. In 2021, that figure rose to about 660,000 - the highest number since the launch of the programs in 2015, official data showed. In December, the agency`s first skills report named the digital sector, the green economy and the care sector as the three "priority economic growth pillars" that can create tens of thousands of jobs in the country. With disruptions brought about by the COVID-19 pandemic, "knowing which skills are in demand has never been more important," said a spokesperson at SkillsFuture Singapore.

A wealthy country like Singapore, with a population of only 5.7 million, can better afford to invest in skills programs than larger and poorer nations, said Ayesha Khanna, chief executive of ADDO AI, a Singaporean technology services firm. "We are going to be an increasingly digital environment, and countries have to proactively help workers upskill," said Khanna, who was on the steering committee of SkillsFuture Singapore. "The pandemic is the nudge to governments to do it." Gig work Worldwide, one of the effects of the COVID-19 pandemic was the explosive growth in the gig economy, as the shift to digital transactions triggered a surge in delivery, transportation and warehouse jobs, largely filled by informal and contract workers. In India alone, the number of gig jobs could rise to 90 million in 8 to 10 years from about 3 million now, according to a study by Boston Consulting Group and the Michael and Susan Dell Foundation. With adequate protections, the gig economy can create opportunities for women and older adults, and make jobs more accessible and inclusive for low-income communities, it said. "The numbers of gig workers surged during the pandemic because people lost jobs or needed additional incomes because of medical emergencies," said Shaik Salauddin, national general secretary of the Indian Federation of App-based Transport Workers (IFAT), an advocacy group. "Many of the delivery workers have Bachelor`s, even Master`s degrees - but there are no jobs, so they are continuing with gig work despite the tough conditions," he said. India has introduced several initiatives to tackle the skills gap, but critics say they are inadequate for the large number of people who need reskilling, and do not address the issue of fewer jobs being created for hundreds of millions of the working-age population. National unemployment peaked at 23.5 percent in 2020 and has remained well above 7 percent since, higher than the global average. "I don`t think enough is being done to enable workers to reskill and transition," said Amit Basole, associate professor of economics at Azim Premji University. "The potential consequences are very serious: we may be looking at long-term structural unemployment for certain kinds of workers. Combined with low-quality education during the pandemic, it can mean a large mismatch of labor supply and demand." For Sarah Mokhtar in Singapore, reskilling for a technology job with her SkillsFuture credits was relatively easy. The 35-year-old, who had worked in the consumer goods industry for nearly 15 years, went to a three-month tech bootcamp run by Generation Singapore, a non-profit that prepares and places workers in jobs. She is now training as an application developer. "There is some risk in making a career switch at this stage," she said. "But I wanted to join an industry that is future-proof."