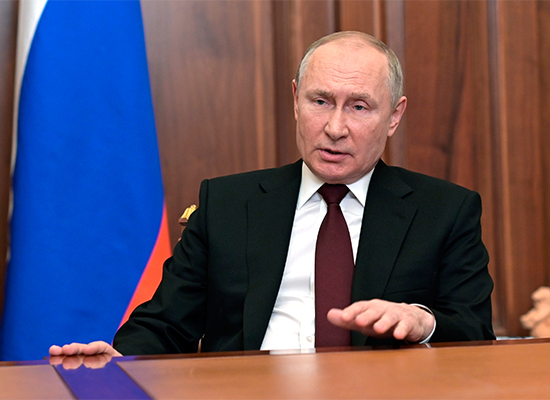 South Korea is put on Russia’s “unfriendly” nation list along with the United States and European Union nations after Seoul has joined Washington-led economic sanctions against Moscow for its invasion of Ukraine.

Russia on Monday announced a list of countries and regions that carried out “hostile” actions against the country, its companies, and people, and the list includes South Korea, the U.S., United Kingdom, Australia, 27 EU members, Canada, New Zealand, Norway, Japan, Singapore, Taiwan, and Ukraine.

This is one of Russia’s first countermeasures against U.S. allies’ cohesive economic sanctions on Russia following its attack on Ukraine, which have caused the ruble to tank to historic lows. The countries on the list are expected to face various other retaliation actions from Moscow, including diplomatic restriction.

The list of hostile nations was prepared following Putin’s presidential decree on Friday that allows Russian government, companies, regional governments, and individuals with liabilities in foreign countries to repay debts in the Russian ruble.

As Korea is now on the “unfriendly” nation list, the Korean government, companies and individuals can collect debts only in the ruble.

Debtors need to create a special bank account in rubles with Russian banks and ask to send payments to foreign creditors in rubles at an exchange rate set daily by the Russian central bank.

Russia said that the move will apply to debt repayments of more than 10 million rubles per month.

The Korean government, however, expects limited impact from Russia’s latest measure because Asia’s fourth largest country’s exposure to Russia debts is not significant, said a senior official from Korea’s Ministry of Economy and Finance.

According to the Financial Supervisory Service, Korean financial companies’ Russia-related exposure including loans and investments stood at $1.17 billion as of the end of February, accounting for 0.4 percent of their entire outside exposure.

And a majority of local financial companies’ exposure with Russia are loans, said an unnamed FSS official.