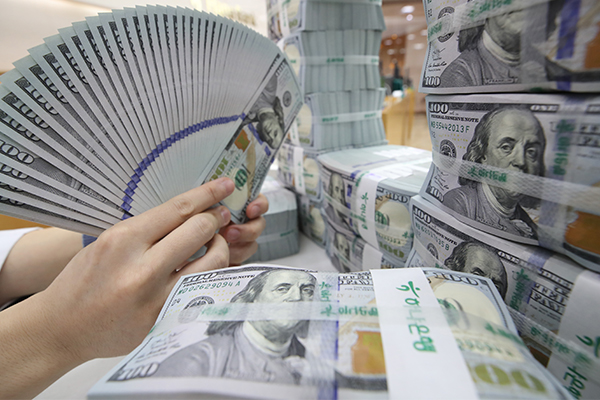 The Korean won weakened to a 20-month low on Friday amid escalating geopolitical tensions from Russia’s invasion of Ukraine.

The local currency has been battered as investors rush to safe assets amid heightened concerns about the economic fallout from Russia’s invasion of Ukraine.

With the strengthening in the U.S. dollar, Korea’s foreign currency reserves added more than $200 million last month on increased returns in non-dollar assets. The FX reserves stood at $461.77 billion at the end of February after gaining $240 million from a month ago, according to the Bank of Korea on Friday.

The value of foreign securities, including stocks, government bonds and corporate debts, came at $410.84 billion after adding $1.77 billion on month, while cash deposits in foreign bank accounts lost $1.56 billion to $26.2 billion.

The country’s reserve position with the IMF stood at $4.61 billion after adding $10 million on month, while gold reserves were unchanged at $4.79 billion.

Korea remained the world’s eighth-largest holder of foreign exchange reserves as of the end of January. China topped the list with $3.22 trillion, followed by Japan with $1.39 trillion, Switzerland with $1.09 trillion, and Russia with 630.2 billion.