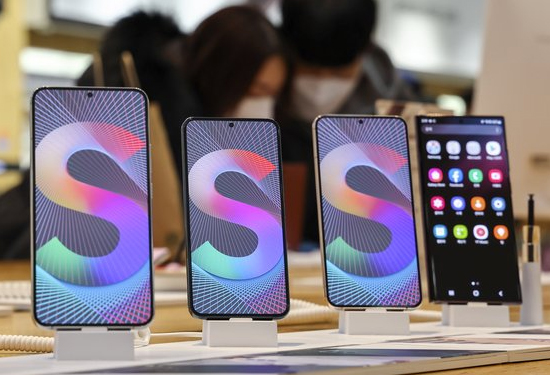 More than 300,000 units of Samsung Electronics Co.’s latest premium smartphone Galaxy S22 series have been activated on the first day in South Korea, setting a new record for the Korean smartphone giant mainly thanks to the S Pen-equipped Galaxy S22 Ultra.

The activation count is the highest ever for the company’s premium smartphone line Galaxy S, according to Samsung Electronics on Wednesday. The previous record was 270,000 units of the Galaxy Z Fold 3 and Galaxy Z Flip 3, the foldable models launched last year.

Mobile service activation for the pre-ordered Galaxy S22 series – Galaxy S22, S22 Plus, and S22 Ultra - kicked off for users in Korea on Tuesday.

Since Samsung Electronics with its mobile carrier partners began receiving pre-orders on the Galaxy S22 series on Monday last week, they have taken around 1.02 million pre-orders across the country. That is the highest pre-order record for Galaxy S models, replacing the previous record of 1.004 million set by the Galaxy S8 series in 2017.

The latest feat is led by Galaxy S22 Ultra, the top-end variation coming with S Pen, iconic stylus of Galaxy Note series. The Ultra accounted for about 60 percent of all pre-ordered Galaxy S22 smartphones activated on Wednesday.

By Woo Soo-min and Cho Jeehyun