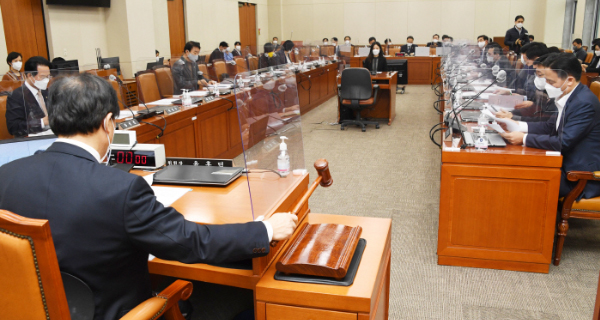 South Korean public enterprises are readying to adopt a controversial mandate of seating a labor representative on their managing board despite strong protests from the business community about infringement in management sovereignty.

The National Assembly Strategy and Finance Committee on Wednesday approved a revised public institution management act that enables labor representatives to join management boards of public entities despite the boycott of the main opposition conservative party.

The business community has been strongly opposed to the move as the highly powerful union in public sector could delay and hamper with management affairs and cause moral hazard.

The implementation of the system picked up speed after presidential candidates Lee Jae-myung of the ruling party and Yoon Suk-yeol of the opposition party backed the move ahead of the presidential election in March.

Finance Minister Hong Nam-ki said that he isn’t concerned too much about management infringement when a labor director joins the board. Whether or not mandating the rule at private companies needs social consensus and would have to be dealt in commercial law.

If the revision is passed at the plenary session on January 11, 131 public institutions including Korea Electric Power Corporation and National Pension Service will be required to seat a non-permanent director recommended or approved by the labor union chief starting in the second half of this year.

European countries like Germany and France have labor representatives on management boards. In Korea, Seoul city government in 2016 introduced the system at its investment agencies under its arm.

The bill was also tabled in previous parliaments but was overturned by the conservative lawmakers.

By Sung Seung-hoon and Lee Eun-joo