Ammunitions are building up as investors ready for South Korea’s 2022 IPO calendar packed with blockbuster and up-and-coming platform names starting with the $10.8 billion mega debut by LG Energy Solution.

The balance in demand deposits, or money placed for immediate withdrawal, at the country’s five major commercial banks, stretched to 659.7 trillion won ($551 million) as of the end of December, adding 10 trillion won from the previous month and as much as 77.6 trillion won from a year-ago period.

Much of the money could be in waiting for blockbuster IPOs this year.

LG Energy Solution would be raising the bar high with a historic IPO of near $11 billion when priced at the top end of its guidance for Kospi listing on Jan. 27. Another high-profile Hyundai Engineering is up next in February, followed by popular names like CJ Olive Young, SSG.com, and Kurly.

The planned debut of the market heavyweights is expected to revive investors’ interest in public offering funds, which have seen massive capital outflow since late last year. 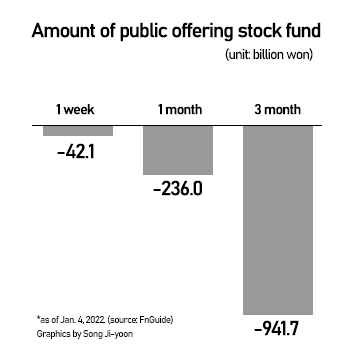 이미지 확대
According to Korean financial market tracker FnGuide Inc. on Tuesday, there was a net outflow of 941.7 billion won ($785.79 million) over the last three months with an ebb of 236 billion won in a single month.

The year-end hiatus contrasts with the buzz at the beginning of the year.

The IPO market quickly fizzled out towards the year-end amid soured sentiment following the IPO of Kakao Pay. Only two IPO stocks managed to debut on prices doubling that of IPO rates and end at daily permissible highs on the first day, which had been a ritual of new entrant in the first half, from September and December.

By Shin Hwa and Susan Lee