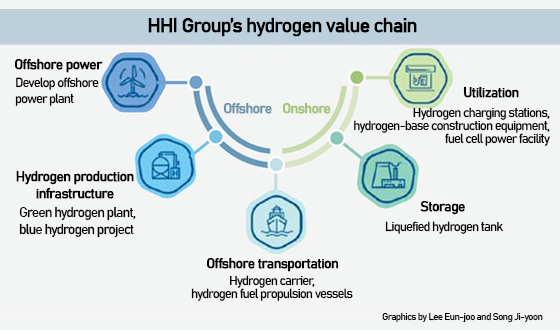 According to multiple sources on Monday, Korea Shipbuilding & Offshore Engineering (KSOE), the shipbuilding holding company of HHI Group, will sign a business agreement with Gangwon Province next month on liquefied hydrogen carrier technology development and commercialization.

The two sides are fine-tuning agreement details, said an unnamed official from the provincial government.

A regulation free special zone was introduced in 2019 with an aim to offer companies special areas where they can demonstrate and commercialize new fourth industrial revolution technologies and products.

Under the scheme, Gangwon Province is building infrastructures like demonstration facilities for hydrogen vessel commercialization, liquefied hydrogen charging stations, and liquefied hydrogen production and storage products. It also plans to create a hydrogen cluster by 2027 to build a liquefied hydrogen-focused industry ecosystem and build a hydrogen import exclusive port by 2030 and nurture it as an energy hub in Northeast Asia.

Development of a liquefied hydrogen carrier by 2027 target will allow KSOE is to take a step closer in establishing a marine hydrogen value chain led by HHI Group.

“It is difficult to build a hydrogen carrier on the concerns of liquefied hydrogen evaporating during voyage,” Kim Sung-joon, head of KSOE’s Future Technology Research Institute, told Maeil Business Newspaper. “That is why there was a perception that a high-priced and power-consuming re-liquefaction system needs to be installed or a tank applying innovative technology.”

Kim, however, said that KSOE is engaged in research and development of a hydrogen carrier without re-liquefaction equipment. 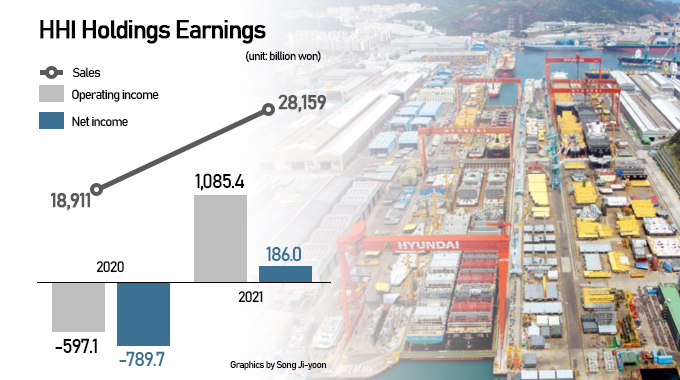 이미지 확대
HHI Holdings on Monday disclosed a consolidated operating profit of 1.09 trillion won ($910.6 million) last year, reversing from losses in the previous years. Revenue also jumped 48.9 percent to 28.2 trillion won. Both revenue and income are record highs since the launch of HHI Holdings in 2018.

Solid earnings were led by refinery and construction machinery businesses.

In a separate disclosure, KSOE announced it logged an operating loss of 1.4 trillion won on sales of 15.5 trillion won in 2021. Sales were up 4 percent from a year ago on the back of increased orders for green vessels, but operating loss went over 1 trillion won due to new compensation expenses and higher prices of rolled steel.