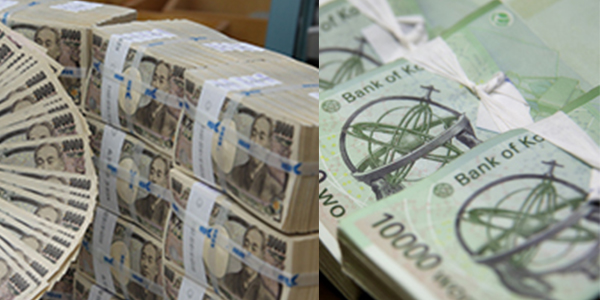 South Korea’s key exports competing with Japanese counterparts are losing ground in Southeast Asia and other key markets with the Japanese currency flirting around the weakest levels of 1990.

A study by Korea Economic Research Institute (KERI) on Thursday surmised that Korean exports from January to September may have lost about $16.8 billion due to the faster weakening of the yen versus the U.S. dollar compared with the won-dollar pair.

It argued if not for the sharper weakening in the yen, more than half or 58 percent of Korea’s record trade deficit of $28.9 billion as of September this year would have lessened.

Such loss is due to the similarity in export items between South Korea and Japan. The export similarity index, indicating the export pattern between the two countries, is 69.2. The similarity is highest among Korea’s other major trade partners. The index came to 68.5 when compared with the United States, 60.3 percent with Germany, and 56.0 with China.

Korea and Japan were found to have highly similar export patterns, especially in steel, petrochemicals, and precision tools, suggesting tougher competition for Korean exporters against Japanese rivals in such categories when the value of the Japanese yen falls steeper than the Korean won against the U.S. dollar.

Due to the global-wide strengthening of the greenback, the Korean won lost 12.05 percent on average this year as of September. The yen sank deeper by 17.9 percent, hitting a fresh 32-year low at one point in October. In October, the exchange rate averaged 145.09 yen to the dollar, 30 percent weaker than a year ago.

Japanese products have been beating Korean counterparts in global markets, from Southeast Asia to European Union with newfound price competitiveness.

Japan extended a deficit streak in its trade balance for the 15th straight month in October to record 2.16 trillion yen ($15.5 billion), the highest since 1979, due to soaring import prices. Still, the country’s exports jumped 25.3 percent on year to 9 trillion yen, led by automobiles, semiconductor chips, and electronics that compete with Korean products in the global market.

Japanese products are expected to enjoy a boon from a weaker yen for some time as the interest rate gap will likely widen further as the Japanese central bank sticks to the ultra-loose policy against the international trend of hikes in interest rates.