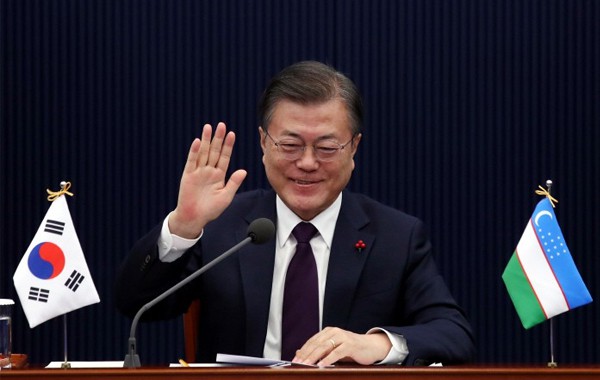 South Korea has formally started talks with Uzbekistan for a bilateral free trade agreement, kicking off its initiative to forge economic ties with countries north of the Korean Peninsula.

South Korean President Moon Jae-in and his Uzbek counterpart Shavkat Mirziyoyev made the official announcement in a virtual summit on Thursday.

The pact, formally named "Agreement for Sustainable Trade and Economic Partnership (STEP),” would be South Korea’s first trade pact under its New Northern Policy initiative, which aims to strengthen trading relationships with a few dozen countries in Eurasia including Mongolia, Ukraine and Kazakhstan.

“Korea considers Uzbekistan as our most important partner in the New Northern Policy,” said Moon. “Today`s summit will be a new milestone in bringing mutual cooperation and prosperity for both countries in the post-coronavirus era.”

The two leaders agreed that their bilateral relations deepened after they were elevated to a "special strategic partnership" following Moon`s visit to Tashkent in April 2019.

The leaders signed a memorandum of understanding to work closely in areas of digitalization, including smart factories, eco-friendly and smart agriculture, and database for Uzbek’s mineral resources.

The trade talks are likely to encourage the involvement of Korean businesses in ongoing Uzbek projects, including the renovation of the Bukhara oil refinery and Mubarek power plant, as well as a new combined cycle gas-fired power plant in Syrdarya and a solar power plant in Sherabad.

On the same day, SK Engineering & Construction Co. signed a contract with the Uzbek government for the modernization project of the Mubarek power plant.

The two countries also scaled up their economic development cooperation fund by doubling the loan limit for Uzbekistan’s public infrastructure projects from $500 million in 2018-2020 to $1 billion in 2021-2023. The increased funds would be used to invest in fast-growing new areas in healthcare, medicine, energy and transportation of both countries.