S. Korea readies shift to ‘living-with-Covid-19’ to back economy 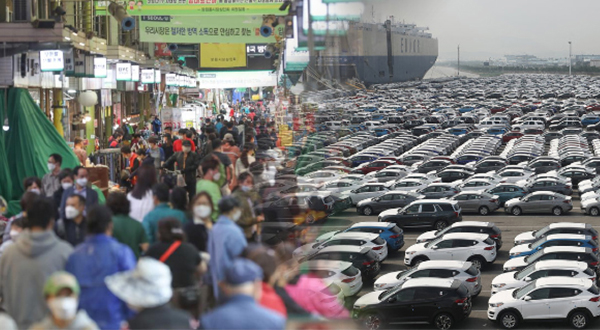 이미지 확대
The South Korean government has officially announced that the country will embark on its shift to “living with Covid-19” in October to help the economy that suffered a fall across output, spending and corporate investment last month amid the prolonged social distancing restrictions.

“We will strive to prepare for a gradual return to normal life" with compensation payment to small business owners [hit by Covid-19] in October and cashback to people on card spending, coupled with the expected herd immunity to be achieved with a 70 percent vaccination rate, said Finance Minister Hong Nam-ki, on Thursday.

Hong’s support for a shift in the country’s quarantine model that more balances economy and distancing rules in October comes as enhanced social distancing measures are not that effective in curbing Covid-19 infection in the country but only hurting the overall economy.

Despite the enhanced curfews on individuals and businesses, Korea has been reporting daily highs in infection cases. The Korea Disease Control and Prevention Agency said that there were 2,486 new infections on Friday, the fifth-highest so far and highest for the day since the pandemic outbreak last year.

On Thursday, Korea also marked a triple fall in output, consumer, and corporate spending in August amid the fourth Covid-19 wave. It is the first time for Korea to report declines in all three areas since May.

According to Statistics Korea, overall industry output including services activity fell 0.2 percent in August from the previous month. The output had declined for two straight months in April (-1.3 percent) and May (-0.2 percent) before a 1.6 percent rebound in June. In July, however, output contracted 0.6 percent. 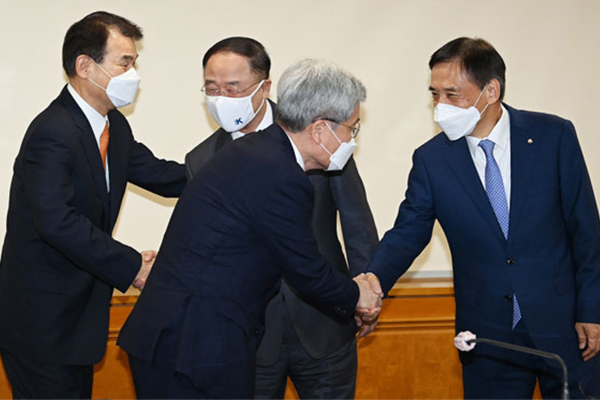 이미지 확대
Amid the growing concerns about the stagnant economy, the political circle urged the government to ease social distancing rules to help self-employed businesses. Shin Hyun-young, floor leader of the ruling Democratic Party, said that the party officially proposed the government for flexibility in operation hours and gathering restrictions.

Noting the strong card sales in August and September and the recovery in consumer sentiment, Finance Minister Hong projected the country’s living with Covid-19 strategy would gain traction once the government’s cash back policy that returns 10 percent of increased card usage and compensation to small businesses hit by the pandemic begin. The cash back scheme on October card usage will begin on November 15.

Industry insiders, meanwhile, noted that it is highly unlikely for the government to drastically relax the current social distancing rules for now. The government on Friday announced that the current restrictions will be extended for another two weeks from Oct. 4.

Some experts also urged the government to push back its transition to a laxed quarantine mode.

Yoo Jin-hong, professor at the Catholic University of Korea, said that herd immunity for a return to everyday life would only be achieved when 70 percent of total population completes both first and second rounds of inoculation.