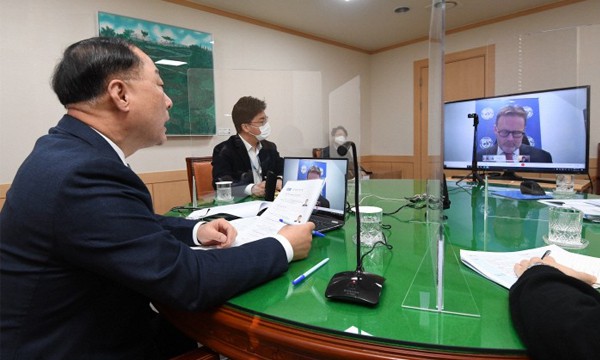 [Photo by The Ministry of Economy and Finance]

The International Monetary Fund (IMF) on Thursday observed the Korean stock market was ready to resume short sale that has been banned for nearly a year at a time when the political circle has been pressuring the government to push back the normalization from March for more fixes on the system.

After annual meetings with the Korean government and institutions, the IMF team led by Andreas Bauer, the Korean mission chief at the Washington-based organization, found the local markets have stabilized enough to accommodate short sale.

Major financial markets across the world have used short selling as a tool to effectively manage risks, although the short selling can also amplify the volatility in the market, according to Bauer.

Short selling is an investment strategy where an investor borrows shares and immediately sells them, with bets on a decline in stock prices, and return the shares to the lender to profit on price difference.

The Korean government banned short selling in the country in March last year amid heavy foreign selloff at the onset of Covid-19 pandemic. The ban is to be lifted on March 15, as announced by the Financial Services Commission earlier this month. France, Italy and other major countries that had imposed short selling restriction have lifted the ban while some including the United States have kept short selling activities in place regardless of the pandemic issue.

Retailers who have been the primary driver of the Kospi’s uninterrupted gains from March last year fret they could be burned once the short sale resumes as the means is favored by foreign and large domestic institutions for profit-taking.

Prior to the latest short selling ban, the Korean government temporary prohibited the practice during the 2008 global financial crisis and the 2011 European fiscal crisis. The stock market did not have any major falls even after resumption.

Bauer also said Korea has room for more fiscal and monetary easing to normalize the economy and jobs faster.