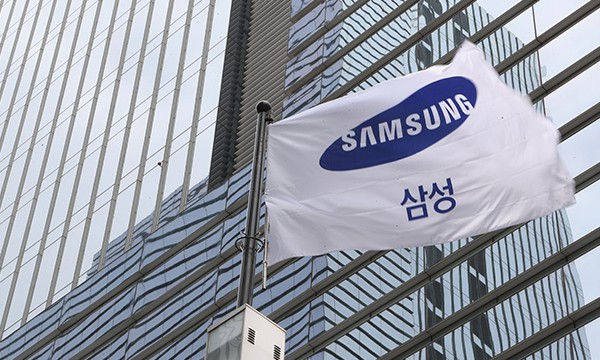 이미지 확대
Samsung Electronics Co. vowed to become more aggressive in preemptive capex and M&As to cement its chip leadership regardless of the absence of its owner-chief, while confirming near 30 percent gain in income for the pandemic-ridden year of 2020.

“We will actively utilize reserved resources to expand strategic facility investment over the next three years,” said Choi Yoon-ho, president and chief financial officer at Samsung Electronics during conference call to report fourth-quarter and 2020 financial statement.

He also indicated the company has nearly completed its ambitious shareholder reward program and is ready to make “meaningful” merger and acquisitions.

Samsung Electronics’ capital expenditures reached 38.5 trillion won last year, up 43 percent from the previous year. A large share of 32.9 trillion won was spent on semiconductors and 3.9 trillion won on displays. 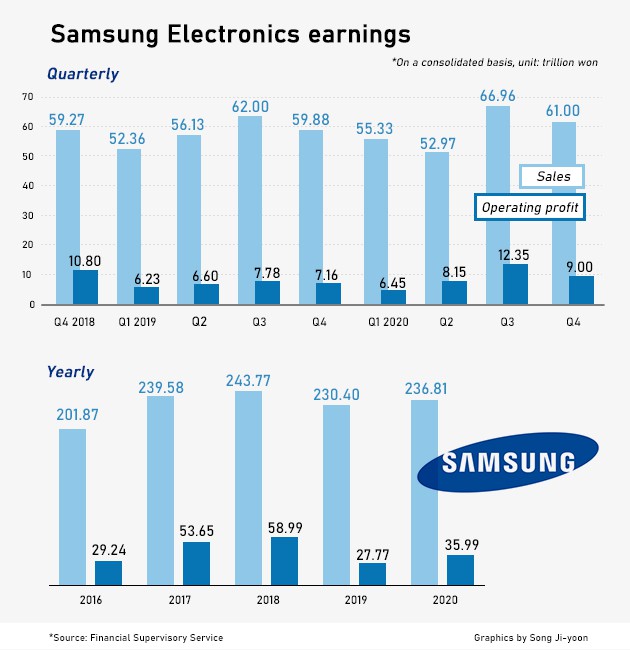 It is the fourth time for the company to post an operating profit of higher than 35 trillion won after 2013, 2017, and 2018. Revenue was also the third-largest ever.

Samsung Electronics’ fourth-quarter earnings weakened from the previous three months due to a fall in memory prices, drop in set business sales and increased marketing expenses, and foreign exchange impact. Operating profit increased from a year ago as overall display and memory industry environment improved.

Overall demand in the memory business was strong but earnings declined due to weak dollar and initial costs associated with ramping up new production lines, the company said. Memory chip prices such as of server-use DRAM also fell in the fourth quarter.

The company expected earnings to decline further in the first quarter from the previous quarter “due to continued weakness in the dollar and costs related to the ramp-up of new production lines.”

It was hopeful for the DRAM market for mobile with expansion with the release of new products and more support towards 5G for low- and mid-end smartphones. It also expected mobile demand in NAND sector to be solid on the back of strong demand from Chinese customers and sales of 5G smartphones.

In 2021, Samsung Electronics said business activities that have been delayed by the pandemic will regain momentum, although uncertainties remain such as weaker dollar and geopolitical risks.

이미지 확대
Its display panel business raised 1.75 trillion won in operating profit in the fourth quarter on sales of 9.96 trillion won, marking the highest-ever quarterly earnings, thanks to growing demand for smartphones and TVs and higher panel unit cost.

Its IT and mobile communications division reported 2.42 trillion won in operating income on sales of 22.34 trillion won. Both revenue and profit fell on quarter on intensifying competition with the launch of Apple Inc.’s new iPhone 12 and higher marketing expenses in the year end.

Looking ahead, the company said market demand for smartphones and tablets is expected to decline on quarter amid weak seasonality. It hoped its new flagship Galaxy 21 series to up profit in the new quarter.

Its consumer electronics division raised 820 billion won in operating profit on sales of 13.61 trillion won in the fourth quarter.

In the first quarter, the company expected the global TV market to grow with demand for premium appliances also gaining throughout the year in advanced markets.

Separately, Samsung Electronics announced it will raise its annual regular dividend to 9.8 trillion won for the 2021-2023 period. Shareholders will also receive 1,932 won per common share in April after shareholder approval in March. Samsung Electronics will also continue to return 50 percent of free cash flow generated in the 2021 to 2023 period.