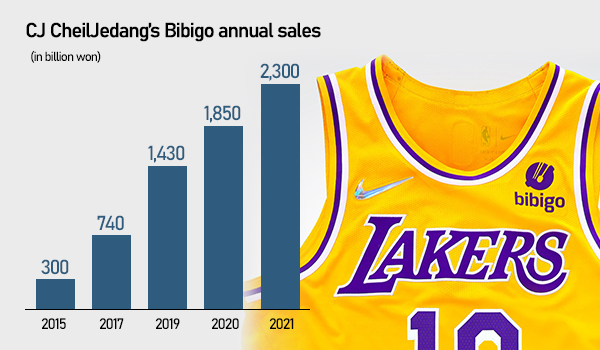 Under the partnership, CJ will feature the Bibigo logo on the Lakers jerseys beginning with the upcoming 2021/22 season and mount various online and offline marketing programs, including courtside branding at Staples Center, and social and digital campaigns. The Lakers have about 60 million followers on social media—the most of any NBA team, and more than the population of South Korea.

CJ hopes to promote Bibigo as a global mega-brand by leveraging on the Lakers’ global fandom.

In 2018, CJ acquired major U.S. food distributor Schwan’s Company to secure growth momentum for its global business. The number of its production bases in California, New York, New Jersey and Ohio quadrupled to 21 and it has recently set a 562,000-square-meter site in South Dakota to add a new dumpling factory.

The food company has also secured sales channels to distribute Bibigo products at more than 30,000 stores of major local name retailers, including Walmart, Kroger and Costco.

Shares of CJ CheilJedang are trading up 0.35 percent at 432,500 won in morning trading on Thursday.

By Kim Hyo-hye and Lee Soo-min