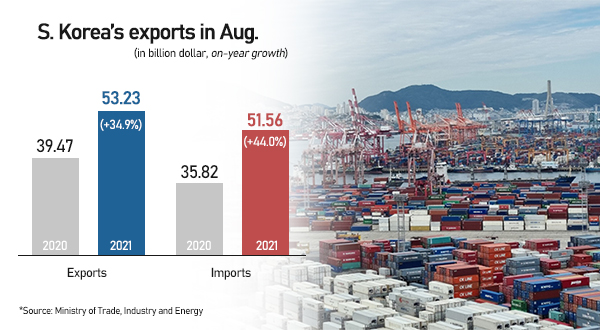 According to data released by the Ministry of Trade, Industry and Energy on Wednesday, the country’s outbound shipments totaled $53.23 billion in August, up 34.9 percent on year. The amount was a record high for August.

Daily exports climbed 29 percent on year to a record high of $2.31 billion, based on 23 working days, one day more than a year earlier.

The cumulative exports from January to August came to $411.9 billion, topping the $400 billion mark at their fastest.

All of the country’s 15 mainstay exports grew by double digits.

Outbound shipments of semiconductors jumped 43 percent on year to a record high of $11.7 billion, topping $10 billion for the fourth straight month, thanks to the strong demand from major data center operators expanding their servers.

Shipments of petrochemicals products surged 81.5 percent to $4.98 billion on rising oil prices and strong demand from the construction and automobile industries.

Exports of automobiles gained 16.9 percent on year to $3 billion on robust sales of high-priced eco-friendly cars and SUVs despite chip supply shortages.