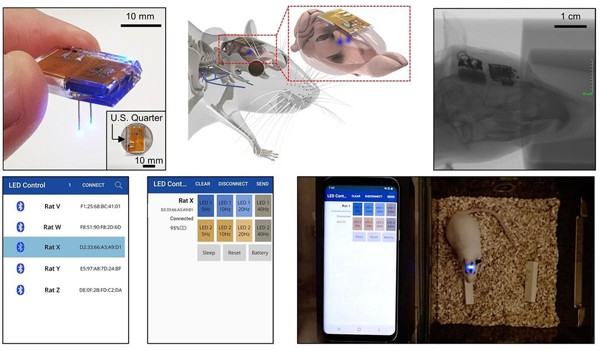 A joint research team led by KAIST Professor Jeong Jae-woong has developed a soft subdermal implant capable of wireless battery charging and programmable controls for applications in optogenetics, an innovative biological technique that involves the use of light to control neurons.

The research joined by a team led by Prof. Kim Jeong-hoon at Yonsei University College of Medicine was published in Friday’s edition of Nature Communications, KAIST announced on Tuesday.

Optogenetics is in the spotlight as it enables target-specific manipulation of neuronal activities with light stimulation for investigation of brain circuitry.

To address these limitations, the research team developed a wirelessly rechargeable, fully implantable, soft optoelectronic device that can be remotely controlled via a smartphone.

The research team combined a small battery-integrated wireless receiver circuit and a wireless communication circuit with a Bluetooth chip to allow the device to be wirelessly charged even in a free-moving condition.

The device which weighs a mere 1.4 grams is composed of soft biocompatible materials.

The research team implanted the device into the scalp of a rat and wirelessly transmitting light to a specific brain region and demonstrated successful suppression of behavioral sensitization after repeated cocaine exposure. The team also confirmed that the device can be automatically charged while the rat moves freely.

The successful demonstration of the unique capabilities of the device in freely behaving rats suggests its broad and practical utilities in various neuroscience research and clinical applications, including addiction, mental illness, and Parkinson`s disease, Prof. Jeong said.