The South Korean economy added 1.1 percent in the fourth quarter thanks to recovery in global demand for chips and tech devices, although it finished the pandemic-ridden year of 2020 with a 1.0 percent contraction, the deepest in 22 years.

The gross domestic product (GDP) of Asia’s fourth largest economy grew 1.1 percent in the October-December period from the previous quarter, eased from a recovery pace of 2.1 percent in the third quarter, according to preliminary data from the Bank of Korea. Against a year ago, the economy contracted 1.4 percent.

“Recovery in exports not only drove recovery in growth but also led to facility investment by companies, raising expectations for economic recovery momentum,” Hong said, although adding private consumption stayed tepid due to the winter outbreak.

The BOK voiced more discretion in judgment in recovery.

“Many institutions project 3.0 percent growth this year, but against a negative growth of 2020, the pace cannot be sufficient,” said Park Yang-su, head of economic statistics department at BOK.

Korean markets were little affected by the data and moved mostly on profit-taking.

The three-year government bond yielded 1.006 percent by midday, sharply above the policy rate of 0.50 percent. The longer-dated curve has been gaining faster in line with economic recovery.

The second-half economy was driven by recovery in exports and record fiscal and monetary stimuli, while domestic demand stayed subdued.

Exports fell in double digits throughout the first half and began to ease in the latter half. 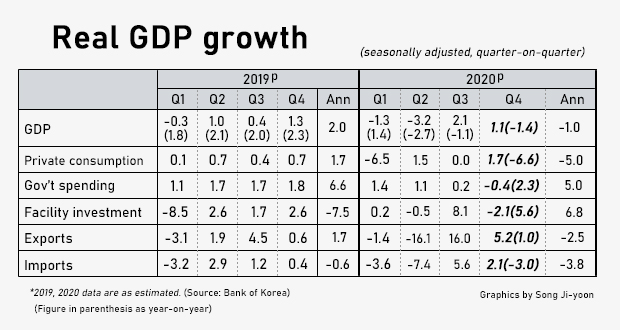 이미지 확대
In the fourth quarter, exports gained 5.2 percent from the previous quarter compared with a 16 percent surge in the third quarter and 16.1 percent plunge in the second quarter. Imports added 2.1 percent mainly led by machinery and equipment items.

The resurgence of Covid-19 and stricter social distancing hampered private spending and job sector, weighing heavily over domestic demand. Private spending fell 1.7 percent in the cited period on decline in services including food and accommodation and goods. For full year, it shrank 5.0 percent,

Facility investment was down 2.1 percent in the October-December period, compared with an 8.1 percent gain in the previous quarter ended September. For full year, it rose 6.8 percent.

Government spending retreated 0.4 percent in the fourth quarter from a 0.2 increase in the third quarter mainly of cost of goods and health insurance payments. But for full year, government spending increased 5.0 percent on record budget and four supplementary increases.

The country’s gross domestic income added a mere 0.7 percent in the fourth quarter and edged down 0.3 percent for the full year.