이미지 확대
SK hynix Inc. CEO Lee Seok-hee brushed aside speculation of early arrival of a bust cycle in the chip boom, forecasting strengthening in memory demand to last until next year.

Shares of the world’s two dominant memory suppliers have been hitting annual lows after foreign institutions downgraded forecasts for memory chip demand. Shares of SK hynix closed Wednesday up 2.46 percent at 104,500 won and Samsung Electronics down 0.4 percent at 74,500 won.

Morgan Stanley, CLSA, and other foreign brokerages and market research agencies like TrendForce have projected memory chip market to go down the hill from the second half of this year.

“The mood in the field is different,” Lee said. Contracts with major clients are mostly complete for next year and if any pricing adjustments are made, it would take place after next year.

During a conference call after its second-quarter earnings announcement last month, SK hynix found memory demand stronger than expected and projected the trend to continue throughout next year.

But since there are jitters over the softening in the DRAM prices, the chipmaker would approach new investment plans “conservatively.”. 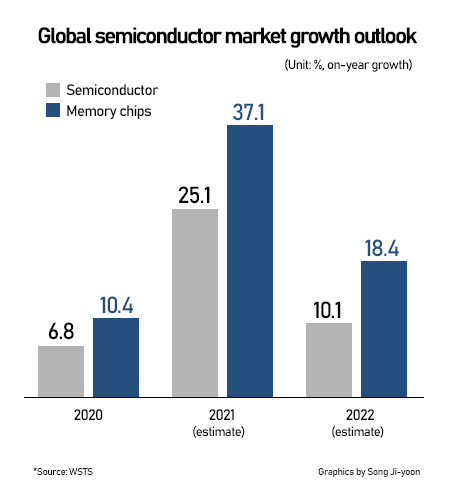 In its report released Monday, WSTS revised up its outlook on semiconductor market growth for this year and the next.

It projected the market to grow 25.1 percent this year compared with previous 19.7 percent.

“This reflects a growth in all major product categories,” it said. “The largest growth contributors are memory with 37.1 percent.”

For next year, WSTS projected global semiconductor market to grow by 10.1 percent, up from initial 8.8 percent in June outlook. The expansion will be driven by double-digit growth of memory category, it said.