Shares of SK Bioscience Co. jumped Tuesday after the company became first Korean vaccine house to gain go-ahead from the government to proceed with a Phase 3 clinical trial of its Covid-19 vaccine candidate.

The company announced in a regulatory filing Tuesday that it has been authorized to undergo the final stage of a clinical trial of GBP510, a coronavirus vaccine candidate it has developed jointly with the Institute for Protein Design (IPD) at the University of Washington. It has become the first drug maker in the country to enter the final clinical study of Covid-19 vaccine.

The Phase 3 clinical trial aims to assess the vaccine’s efficacy by comparing it with AstraZeneca’s Covid-19 vaccine. It is the second vaccine candidate in the world following French drug maker Valneva’s candidate to go through a comparative clinical study with AZ vaccine.

SK Group’s another biotech unit SK Biopharmaceuticals Co. on the same day reported a more than 10-fold year-over-year growth in sales in the second quarter ended June this year, but its operating loss widened on increased R&D and advertising expenses. 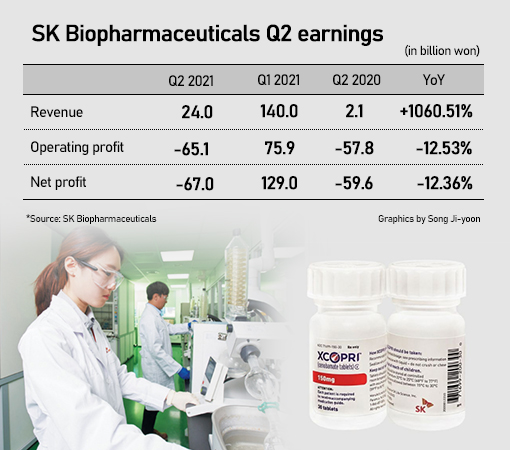 이미지 확대
SK Biopharmaceuticals estimated its operating loss on a consolidated basis from April to June came at 65.1 billion won ($56.8 million) in its earnings guidance disclosed Tuesday. The figure reversed from a profit of 75.9 billion won in the previous three months and rose 12.5 percent from a year earlier.

Sales were projected at 24 billion won, down 82.9 percent from the previous quarter but up 1,060.5 percent from last year. Net figure swung to a loss of 67 billion won from a profit in the first quarter and the loss expanded 12.4 percent from a year ago.

The steep gain in sales of the company’s epilepsy drug Cenobamate with brand name XCOPRI in the U.S. market buoyed its overall revenue in the second quarter, the company said. But its losses widened due to the increased R&D costs and SG&A costs for promoting the drug overseas.

SK Biopharmaceuticals expects sales of the anti-epileptic drug would reach beyond its annual target this year. It aims to release the treatment in China, the largest drug market in Asia, within this year, following its entry into the U.S., Europe and Japan.