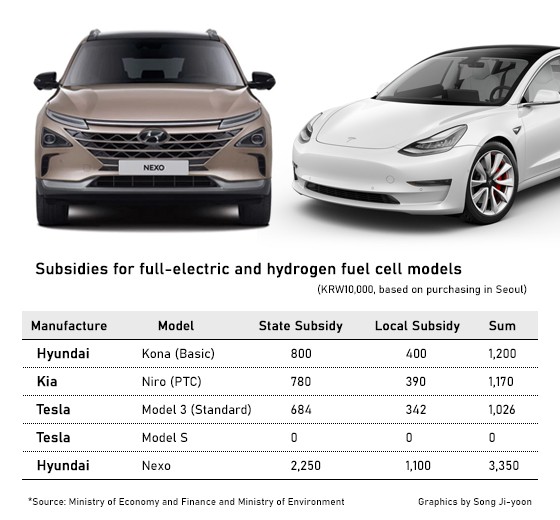 이미지 확대
South Korea will offer up to 19 million won ($17,000) in subsidies to people who buy an electric car this year and up to 37.5 million won for a hydrogen fuel-cell electric vehicle to ensure more eco-friendly cars on the road as part of the country’s green push, according to the government’s expanded subsidy plan.

The government will also install 31,500 EV charging systems and build 54 hydrogen stations across the country this year to provide a more convenient charging environment.

The bold green car subsidy program is a part of the Korean government’s Green New Deal initiative unveiled in July to nurture renewable energy, green infrastructure, and green industrial sectors as the country’s new growth engines as well as to address air and water pollution.

Hyundai Motor Kona and Kia Motors Niro are among the EV models to receive the largest subsidy benefit with up to 19 million won in total from the central and local governments. Up to 37.5 million won will be offered in subsidy to those who buy Hyundai Nexo hydrogen fuel-cell electric car.