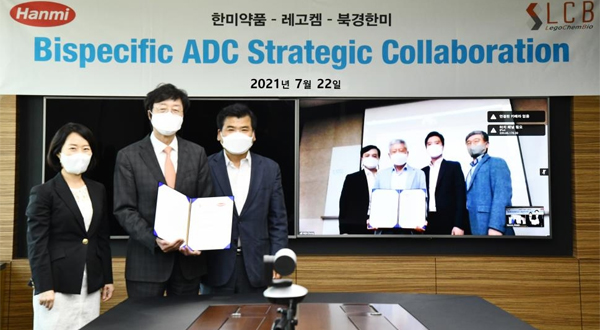 Hanmi Pharmaceutical and LegoChem Biosciences will jointly develop a new antibody-drug conjugate (ADC) to treat cancers based on a bispecific antibody developed by Hanmi Pharm’s affiliate in China, the South Korean drug company announced on Friday.

Under an agreement between the two companies, they will use the penta amino acid mutated bispecific antibody or Pentambody independently developed by Beijing Hanmi Pharmaceutical to develop a novel cancer treatment. This is an advanced antibody technology that allows one antibody to simultaneously bind to two different antigens.

Hanmi Pharm will be responsible for commercial development of an ADC candidate made by combining Beijing Hanmi’s proprietary molecule and LegoChem’s ADC technology, the company explained in a press release.

An ADC is a new class of highly potent biopharmaceutical drug composed of an antibody linked to a biologically active drug or cytotoxic compound via a chemical linker. A bispecific antibody-based ADC can recognize cancer cells more easily and minimize toxicity to normal cells. It can be a new treatment option for cancer patients who fail to respond to single antibody ADCs.

Hanmi Pharm said it expects to initiate preclinical trials of the drug next year.