According to preliminary Korean National Balance Sheets for 2020 released jointly by the Bank of Korea and Statistics Korea on Thursday, total net assets owned by families and non-profit organizations reached 10,423 trillion won last year, up 11.9 percent from the previous year. Net assets per household averaged 512.2 million won, up 10.6 percent from the previous year, marking an all-time high in both amount and growth, data showed.

Of the total net asset, 42.8 percent were residential buildings, followed by other real estate properties (19.4 percent), and cash and deposits (15.8 percent).

The surge in national assets was led by a spike in land prices. 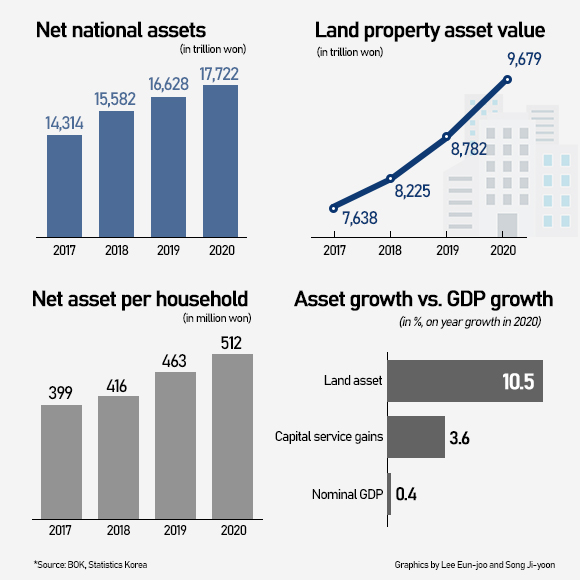 이미지 확대
Non-financial assets held by businesses were also mainly real estate properties that accounted for 77 percent of the total.

The jump in assets came from debt-financed binge amid easy and cheap liquidity during the Covid-19 environment.

Financial debts held by households reached 172 trillion won last year, up 9.2 percent from a year ago, nearly doubling from a 5 percent growth in 2019.

The financial imbalance ratio – the ratio of financial assets in national assets – rose to 108.2 percent last year, the highest since the 2008 global financial crisis.

According to the BOK, household credit reached a record high of 1,765 trillion won in the first quarter this year, raising an alarm over deteriorating financial imbalance and potential financial risk if debt goes sour when the central bank raises interest rates. The BOK has already signaled one or two hikes in the base rate to contain household debt.

Asset appreciation has been excessively faster than economic growth.

Capital service gains that were up by an average of over 4 percent in the last five years also remained at 3.6 percent last year, which shows that capital in a low interest rate environment is flowing mainly into the asset market rather than sectors that help raise productivity.

By Kim Jung-hwan and Lee Eun-joo