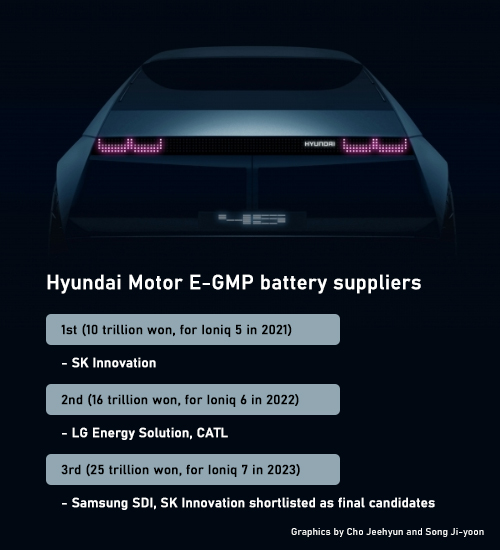 Samsung SDI is said to have been shortlisted with SK Innovation as finalists for the exclusive battery supplier for Hyundai Motor Group’s upcoming EV models that will be built on Electric-Global Modular Platform (E-GMP), the conglomerate’s proprietary platform for EV models including Ioniq sport utility vehicles, according to industry sources on Sunday.

Hyundai Motor will award the third battery order worth 25 trillion won for E-GMP vehicles this month. The automaker is expected to pick at least two suppliers, given the bulky order volume. Samsung SDI and SK Innovation stand on par in pricing and product quality, making them both highly competent suppliers, according to industry sources,

The third batch of E-GMP batteries will be installed on Ioniq 7 electric SUV to be launched in 2023. Previously, Hyundai Motor picked SK Innovation as the EV battery supplier for its first E-GMP EV Ioniq 5. For its second batch for the Ioniq 6, the automaker selected LG Energy Solution and China’s Contemporary Amperex Technology Co. (CATL). The earlier EV battery orders are estimated at 10 trillion won and 16 trillion won, respectively.

이미지 확대
If Samsung SDI wins the final EV battery orders from Hyundai Motor, it would make the first cooperation between the two Korean conglomerates. Following the EV battery partnership, Samsung and Hyundai under the new leadership of the third generation of founders are expected to expand their partnership in the automotive sector beyond EV battery to semiconductors for self-driving car technology.

In the global EV battery market, LG Energy Solution stood No. 2 with a 22.6 percent share, Samsung SDI No. 4 with 5.8 percent, and SK Innovation No. 5 with 5.5 percent, based on 2020 January-November sales, according to SNE Research report.