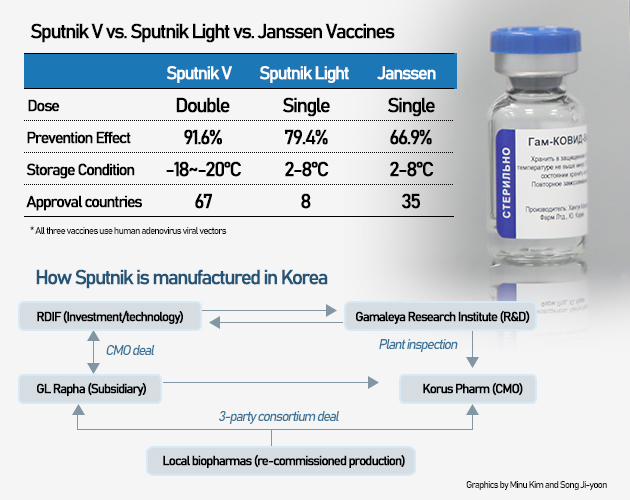 이미지 확대
Sputnik Light, the single-dose version of Russia’s Covid vaccine Sputnik V, will be a major vaccine type to be produced in Korea under a commissioned contract with the Russian government, according to Hwang Jae-gan, Chairman of Hankook Korus Pharm.

The Russian government is pushing for Sputnik Light as a strategic export item and therefore the Korean contract producer has informed its consortium members of migration in their vaccine production from the double dose vaccine to a single dose, Hwang told Maeil Business Newspaper on Sunday.

Sputnik Light was approved by Russian health authorities on June 12, making Korea the first country to produce the single dose vaccine outside Russia.

There will be no change in facility arrangement and cost structure even for production of the single-dose vaccine, Hwang stressed, adding the established infrastructure will be used without any conversion.

Hankook Korus Pharm plans to send an initial batch of Sputnik Light produced in Korea to Russia on July 1 for technology validation.

A team of Russian scientists already shared processing technology for Light with the consortium in February and March when they visited the local production site for due diligence.

Sputnik Light is the fourth approved home-grown vaccine against Covid-19 and it uses a human adenovirus viral vector like Janssen’s. But the single dose vaccine is more convenient and advantageous in terms of price and storage condition compared to the double-dose version.

Sputnik V and Sputnik Light are similar in terms of prevention effect against Covid-19 with 90 percent and 80 percent, respectively, but the latter is advantageous for quick reach to herd immunity, Hwang said.

The Russian government is planning to provide affordable and accessible coronavirus vaccines to countries such as Latin America, the Middle East, Africa and Southeast Asia. Sputnik vaccine production in Korea has been delayed and this was caused by the Russian government’s focus to Sputnik Light, Hwang said.

Hankook Korus Pharm was the only Korean company invited to St. Petersburg International Economic Forum (SPIEF) held early this month with Russian President Vladimir Putin present. Russia has signed contracts for Sputnik vaccine production with 24 companies around the world and Hankook Korus Pharm was the only invited company from Korea, Hwang said, adding that RDIF awarded the company an exclusive right to sign contracts with local suppliers to facilitate vaccine production and distribution, and GL Rapha is the strategic contract partner of RDIF.

Hwang studied microbiology at Pusan National University and worked at Daewoong Bio prior to his involvement in the establishment of GL Rapha in 2007 and the acquisition of Hankook Korus Pharm.