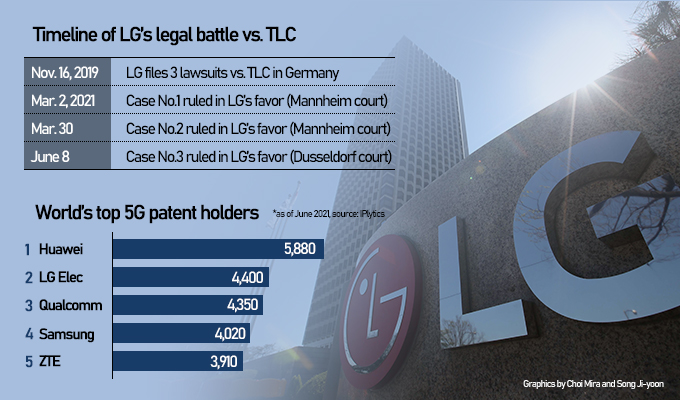 이미지 확대
South Korea’s LG Electronics Inc. folding its smartphone business has gone aggressive in defending its mobile-related patents to keep up revenue from its R&D and proprietary power.

In a statement on Thursday, the electronics giant disclosed that the Dusseldorf Higher Regional Court in Germany ruled earlier this month in favor of its claim accusing Chinese consumer electronics maker TLC of breach in a long-term evolution (LTE) standard essential patent (SEP).

LG had won two other cases with a Mannheim Court in Germany in March.

The Korean technology company said these rulings are significant as there are many other smartphone makers using LG’s LTE patents without paying royalties.

LG has been waging a legal battle with Wiko for infringing the company’s LTE patents. LG has already won two of the three cases appealed by the European handset manufacturer, and the third case will be decided at the end of this year. LG filed three lawsuits against Wiko in July 2018, all of which were ruled in LG’s favor in 2019. Wiko had appealed for each.

The Korean consumer electronics maker took a legal action against BLU in March 2017 with the U.S. International Trade Commission and a regional court in Delaware, charging the U.S. smartphone maker for violating five of its LTE patents. Six months later in September, BLU signed a license agreement with LG.

The latest legal battles by LG on mobile device-related patents suggests that LG will continue to be up in arms to protect its patents against global smartphone manufacturers in courts even after it discontinues production of its own smartphones. The company said in a conference call held during its first-quarter earnings conference that it has not decided on how to use its patents to establish a new business model. It is still examining various scenarios on its wireless device patent assets after its complete exit from the smartphone business. I will announce its detailed plan on smartphone IPs once it is set.

According to U.S. intellectual property researcher TechIPm, LG was the world’s largest holder of LTE standard essential patents for five consecutive years from 2012 to 2016. As of the mid-June, the company ranked second by holding around 4,400 5G patents, according to IPlytics.

“As we hold a number of universal patents whose standard essentiality is recognized by global courts, we will aggressively take legal actions against companies using our technologies without a license,” said a company official.