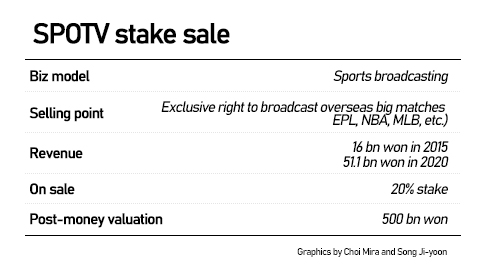 이미지 확대
SPOTV, a sports channel in Korea that has made a staggering growth lately for its streaming of overseas matches, is set to draw fresh capital as an offer of a 20 percent stake has drawn multiple bidders.

Ernst & Young Hanyoung overseeing the sale will pick a preferred bidder among multiple bidders including SG Private Equity and Aju IB Investment in July, according to sources close to the deal. An offer of 20 percent from 100 percent owned by Eucleia Holdings Co. is estimated at 100 billion won ($89.8 million). Once the deal is completed, SPOTV will be valued at 500 billion won.

The channel was launched in 2008 by Eucleia Holdings whose CEO and largest shareholder Hong Won-ui is an avid sports fan.

Sales of SPOTV more than tripled from 16 billion won in 2015 to 53.3 billion won in 2019 on the fast increase in the number of subscribers to its sports streaming platform SPOTV Now launched in 2017. The platform provides the world’s best matches from EPL, MLB, NBA and UFC based on a monthly subscription. Although revenue stagnated last year as Covid-19 pandemic cancelled many leagues and matches around the world, sales still stayed in the 50 billion won level.

Investors highly value the platform’s monthly recurring revenue (MRR), one of the most important metrics for subscription business models. MMR is the measure of monthly revenue generated by active subscriptions.

Broadcasting and streaming platforms are willing to pay a significant amount of money for sports broadcast rights because they have become more profitable than ever. Coupang Play, the newly launched streaming service of Korea’s e-commerce giant Coupang, is seeking to become an exclusive online platform to broadcast the Tokyo Olympic Games. CJ ENM will air UEFA EURO 2020 matches and 2022 FIFA World Cup qualification matches for Asian countries. In the U.S., Amazon acquired exclusive rights to the NFL’s Thursday Night Football for the next 10 years.