Samsung Electronics will showcase a mass-market solid-state drive product based on its 7th generation V-NAND chip, which is the smallest yet in the industry, in the second half of the year, according to Song Jai-hyuk, executive vice president and head of flash memory product & technology at Samsung Electronics who posted an editorial on the company’s website.

“The company has already secured a working chip of its 8th generation V-NAND solution featuring over 200 layers and plans to introduce it to the market in accordance with consumer demand,” Song said. “Just like how the first V-NAND was introduced in 2013 after more than 10 years of research, the company will be the first to overcome the height limit that will come about one day, through our use of 3D scaling technology.”

“For many years, NAND flash memory solutions designed to store data featured a two-dimensional structure, where chips were scaled and laid onto flat surfaces,” “But these 2D structures had significant limitations in terms of the amount of data that could be stored.”

Song added that Samsung “pioneered its V-NAND flash memory, a solution that connects its cell layers through pierced holes in vertically-stacked 3D space” and emphasized that it is the “first company in the world to develop and commercialize such a memory solution.”

The first solution developed by Samsung Electronics featured 24 layers, which now has reached to become near 200.

In the editorial titled, “Extraordinary Innovation for a More Unforgettable World: The Story Behind Samsung’s Pioneering V-NAND Memory Solution,” Song wrote that “much like with high-rise apartments, simply stacking more layers on top of one another is not everything.”

It is the company’s first response to industrial judgment that the top chipmaker could be lagging behind Micron in migration and commercialization of the next-gen chip processing. 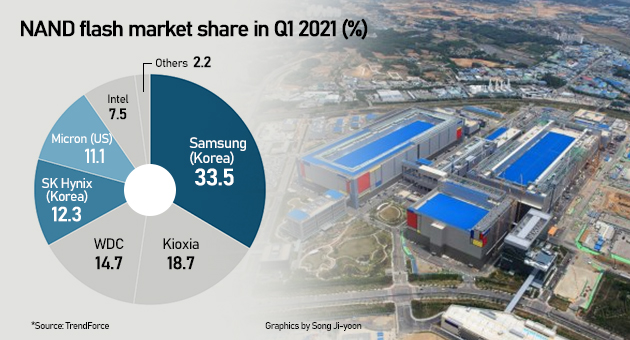 “Even if the number of layers is similar, a closer look reveals minute differences in functionality and structure,” he said. “In the world of semiconductors, this can be of the utmost importance as even the smallest difference leads to a tremendously different outcome.”

The company, through 3D scaling technology, was able to reduce the cell volume up to 35 percent by decreasing both surface area and height, he said.

In the NAND sector, single-stack technology refers to one that stacks over 100 layers at once, while double stack at two shots. A single-stack etching technology that reduces chip area and height is considered more efficient.

Samsung Electronics has developed 6th generation 128-layer NAND flash memory in single stack technology and in theory can move it up to 256-layer.

In the near term, Samsung Electronics is expected to extend heyday on memory front. 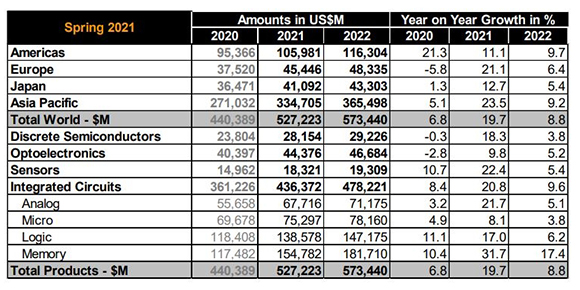 According to a report by World Semiconductor Trade Statistics (WSTS), a semiconductor market data provider, revenue in the global chip market is projected to grow 19.7 percent this year to $527.2 billion, more than doubled from its previous on-year growth projection of 10.9 percent in March.

The Asia Pacific region, which includes Korea and Taiwan, is expected to see the highest growth of 23.5 percent and account for 63.5 percent of overall revenue this year.

The trend will likely go on next year, growing 8.8 percent from this year led by memory sector which will keep up a double-digit growth of 17.4 percent, according to the report.