Shares of South Korea’s No. 2 dairy brand Namyang Dairy Products on Friday have surged by daily permissible 30 percent upon the news that the scandal-ridden owner family is selling off a controlling stake in the company to a private equity firm.

Namyang Dairy Products said in an after-trade regulatory filing Thursday it had signed a contract to hand over 378,938 common shares held by the company’s former chairman Hong Won-sik and his family members – his wife and grandson – to Seoul-based buyout fund Hahn & Company for 310.7 billion won ($278.1 million). The total number of stakes accounts for about 53 percent in the company. The two parties aim to close the deal by Aug. 31.

Upon the regulatory filing, Namyang Dairy Products shares shot up by their maximum 10 percent limit in after-hours trading on Thursday.

The Kospi-trading stock has been trading at their permissible high of 30 percent at 570,000 won since opening bell.

The transaction follows the company’s poor business performance accelerated by a recent dustup over self-hyped data on anti-coronavirus activity of its fermented milk product.

Ex-chairman Hong, who owns 51.7 percent of the company, offered to resign for causing controversy over the effectiveness of its yogurt drinking product against Covid-19 and vowed not to hand down management to his children. Two family members also stepped down from the board of directors.

Police are investigating the company for allegedly spreading misinformation to customers with the false claim, while the company was also warned of two-month business suspension due to the controversy. 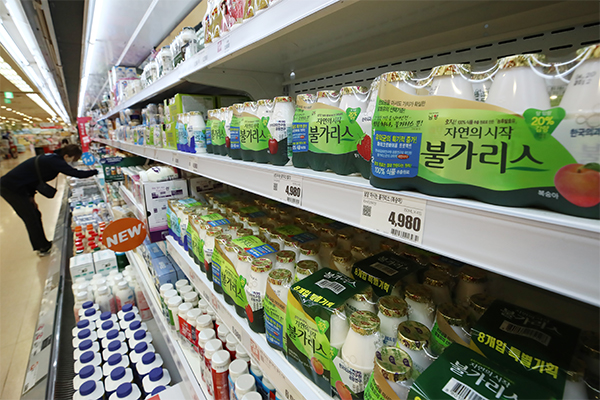 The company’s emergency committee set up after Hong’s resignation said early last week it would consider all options including the sale of owner’s stake to start as a new business organization with more professional outside directors.

Hahn & Company will focus on enhancing corporate value of Namyang Dairy Products based on its track record of successful operation of Woongjin Foods. It also took over inflight service operations from Korean Air Lines in August 2020.