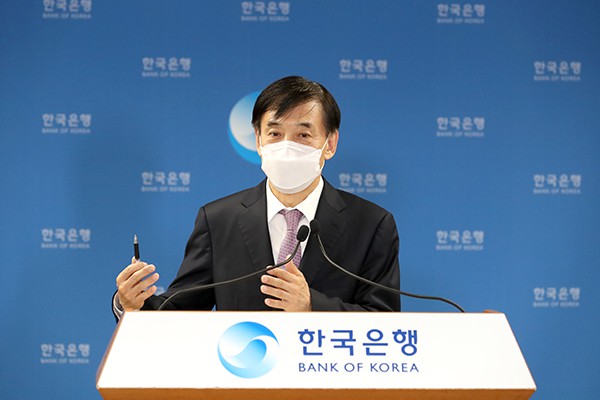 [Updated with comments from BOK governor]

The Bank of Korea chose to stay pat in the first rate-setting meeting for 2021 Friday and maintained to keep monetary policy loose and accommodative of the fragile economy under Covid-19 fallout, although raising concerns for excessive consumer capital concentration in the stock market from easy and cheap liquidity.

“Over-speeding (vehicle) can shake even at a small shock. Stocks can come under correction at changes in global monetary policies, unexpected geopolitical risk or upset in the Covid-19 vaccine rollout,” BOK Governor Lee Ju-yeol in an online press conference after the monetary policy meeting.

“Although it is difficult to find the latest Kospi run as bubble, the rise is overly fast against past charts,” he said.

Debt-financed stock investment could cause “intolerable” woes for investors, he warned. 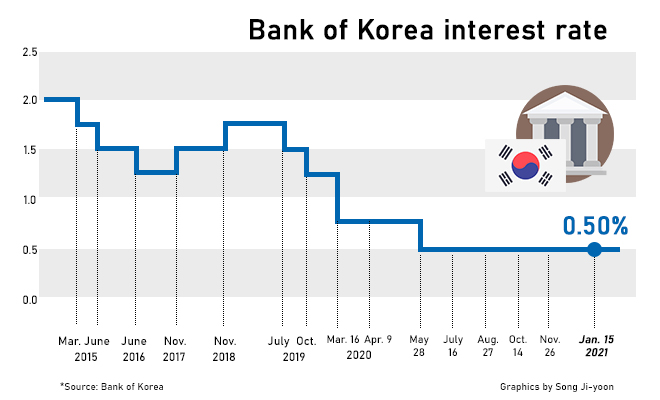 이미지 확대
The Korean central bank left the policy interest rate unchanged at 0.5 percent, a historic low untouched since a 25-basis point lowering in May 2020 on the heels of an emergency cut of 50 basis points in March.

BOK’s inaction was largely expected as liquidity is already lush due to years of record-low interest environment and bubbly assets from housing and stock frenzy, despite limping economy due to the fallout of year-long Covid-19.

Lee stressed it was too early to speak of any change in monetary policy direction. “Given the uncertainties in the economic developments and dangers in the weak class, the difficulties won’t be resolved in a short time,” he said.

Monetary authorities are closely watching the market in cases of steep correction but shrugged off worries of immediate financial risk as debt financing is still cheap and spread out over long-term maturities.

Korean debt in both private and public sector surged by record levels last year. Household loans added 100.5 trillion won on year to 988.8 trillion won and corporate borrowings by 107.4 trillion won to 976.4 trillion won as of December. Fiscal deficit also stretched by around 119 trillion won for an estimated outstanding debt of 847 trillion won at the end of last year after the government raised four supplementary budgets through debt financing to fight the virus crisis.

이미지 확대
Korea, meanwhile, is expected to return to growth pace after vaccines and cures roll out. The bank projects the country’s economy to expand 3 percent this year as it previously projected in November. The government places more sanguine goal of 3.2 percent, while the Organization for Economic Cooperation and Development (OECD) estimates a 2.8 percent after a negative growth this year.

Most believe the BOK won’t shift to rate normalization until clear sign of recovery next year.

The BOK governor in his new year’s address had said “it is necessary to keep the monetary policy loose as the uncertainties for growth are high and the inflation is expected to hover below the target for a considerable period.”

Global economic analyst Trading Economics in a recent report predicted the BOK to maintain the policy rate steady at 0.5 percent this year and incrementally normalize to 1.25 percent, the level before the Covid-19 pandemic.

The financial market stayed mostly calm. The yield of the benchmark 3-year government bond ended the Friday morning session at 0.987 percent, down 1 basis point. The Korean won finished the day down 0.12 percent at 1,099.40 against the U.S. dollar, the main bourse Kospi 2.03 percent lower at 3,085.90.