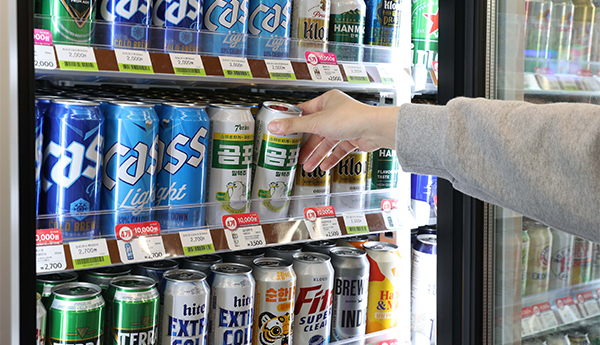 South Korea’s convenience store chain CU scrambles to ramp up output of Gompyo Wheat Beer as supply cannot keep up with hot demand over the craft beer produced in collabo with one of the country’s oldest flour brand.

According to industry sources on Tuesday, CU notified of temporary suspension in the beer deliveries to its franchisees after three million cans distributed on April 28 sold out in just two weeks.

Gompyo beer has been exclusively available at CU shops since May last year in collaboration with Daehan Flour, one of the oldest food makers in the country, and local brewery 7Brau. It instantly became popular, selling more than 300,000 cans in one week of its release. Last month, it reached No. 1 in sales, beating out foreign competitors and traditional leaders like Cass and Hite for the first time in 30 years.

Its manufacturer 7Brau had to turn to bigger brewery Lotte Chilsung Beverage to boost its limited production capacity 15 times to three million cans per month in response to explosive demand, only to see them sell out in just two weeks.

“Production fell short of demand even though Lotte Chilsung Beverage has kept its factories running at full capacity. We are planning to boost production lines to supply the beer without further delays,” a CU official said.

The supply of Gompyo beer is expected to normalize in two weeks.

Other convenience stores in the country are also seeing surge in sales of craft beer. Emart24 reported that its craft beer revenue from January to April soared 526 percent against the comparable period last year. It has a lineup of more than 20 craft beers.